UPDATE: Because this story received a lot of interest and generated questions, we wanted to take this opportunity to provide additional information. The original story can be found below. 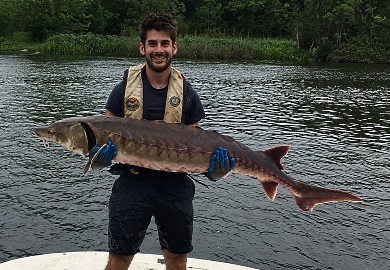 The Atlantic sturgeon is a prehistoric fish that is found along the Atlantic Coast of the U.S. and inhabits most of South Carolina’s major river systems. Historically, it was harvested for its meat and roe (caviar) resulting in major overall population declines in many Southeastern Rivers and eventually lead to it being listed by the National Marine Fisheries Service (NMFS) as an endangered species in 2012. South Carolina Department of Natural Resources (SCDNR) fisheries biologists are currently studying the ancient fishes’ behavior in most of South Carolina major rivers by tagging the fish with acoustic transmitters and tracking their movement.

In order to track these fish, they must first be captured, which can be very difficult in large reservoirs. Sturgeon are benthic feeders and spend most of their time near the bottom of the river using the barbels on their snout to locate small food items in the sediment (clams, crustaceans, insects, worms, etc.), which they suck into their mouths like a vacuum. Because of their diet and habitat preferences, they are not easily caught on a hook and line which is why many recreational anglers rarely encounter them. Additionally, since Atlantic sturgeon are endangered “it is illegal to fish for, catch or keep Atlantic sturgeon or its parts commercially or recreationally.” Researchers are only allowed to capture these fish under strict permitting from NMFS. In South Carolina, SCDNR fisheries biologists set weighted gill nets that sit near the bottom and capture fish when they become entangled in the net. The fish are then held on a boat in a large -live well with recirculating flow where they are “worked up,” a process that includes measuring, weighing, collecting biological and genetic samples, and tagging. Part of the tagging process includes performing surgery and carefully inserting internal acoustic transmitters into the body cavity of the fish, these transmitters emit a unique code, that when detected, allows for the identification of an individual fish. Once the work up has been completed the fish is immediately returned to the river. 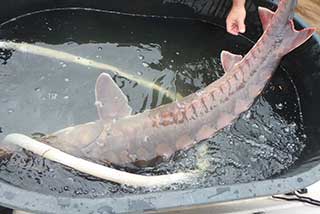 At this point, a stationary acoustic telemetry array takes over monitoring the tagged fish. This array consists of acoustic receivers stationed along all the major rivers and estuaries in SC, and up and down the Atlantic coast. Currently, SCDNR maintains almost 350 of these receivers in rivers, lakes, and nearshore ocean. When a fish with a transmitter swims within a Ľ mile of the receiver, its unique transmitter code is recorded. Fisheries biologists then download the data from these receivers and can determine which fish were near a particular receiver and at what time. This type of data has been vital to answering many questions concerning fish movements, especially for fish that cover large areas and are hard to observe in the wild.

Like salmon, Atlantic sturgeon are anadromous fish, meaning they are born in fresh water, spend portions of their life in salt water, and reenter the same water bodies in which they were born in the spring or fall when it is time to spawn. Because of the telemetry array, SCDNR fisheries biologists discovered that in September 2016 a tagged Atlantic sturgeon (transmitter code A69-9001-26455), swam up the Cooper River and entered Lake Moultrie through the Pinopolis Dam Navigation Lock. It was on a presumed spawning run in the Cooper River and while three other adult Atlantic sturgeon were detected just below the Pinopolis Dam, only one entered the lake. There is a population of shortnose sturgeon (the smaller cousin of the Atlantic sturgeon) that remain in the upper portions of Lake Marion in the Santee-Cooper Lakes year round. However, this was the first tagged Atlantic sturgeon documented in the Santee-Cooper Lakes. Just like manatees that occasionally enter the lake system, this fish could not find a way out. With the increasing water temperatures, and potential lack of food, SCDNR fisheries biologists decided intervention was necessary.

In the weeks leading up to the capture, additional receivers were deployed in Lake Moultrie to identify this fish’s movements. Collected data showed biologists what area the fish was most likely to be located, which was near the southeast portion of the lake and along the dam wall. On May 31st a team of biologists led the charge to capture the sturgeon in hopes of returning it back downriver. The day began with downloading nearby receivers and “listening” for the fish with hydrophones. Hydrophones can be thought of as underwater microphones and like the array receivers, pick up the unique transmitter code the tagged fish send out. The fish was eventually located near the main navigation channel in water approximately 55 ft. deep. After determining which direction it was headed, several netting boats surrounded the area and through a coordinated effort, about ten anchored gill nets were set in a large circle around the fish and then we waited. To everyone’s amazement, after several hours and on the second to last net haul, the fish was finally captured. It was then transported back downstream thru the Pinopolis Lock and safely returned to the Cooper River. Recent receiver data has shown that it swam all the way back down the river and is currently in the Charleston Harbor. Biologists will continue to monitor the fish’s movements and expect to see it return to the Atlantic Ocean soon.

For more information about diadromous fish.

A South Carolina Department of Natural Resources (SCDNR) fisheries biologist team rescued a five-foot Atlantic sturgeon during a rescue mission in Lake Moultrie on May 31, 2017.

The Atlantic sturgeon is a prehistoric fish that inhabits most of South Carolina’s major river systems. Historically, it was harvested for its meat and roe (caviar), resulting in a major overall decline in many Southeastern rivers and eventually leading to it being listed as an endangered species in 2012. SCDNR biologists are currently studying the ancient fishes’ behavior in South Carolina by tagging the fish with acoustic transmitters and tracking their movement.

Last September, a tagged Atlantic sturgeon swam up the Cooper River and entered Lake Moultrie through the Pinopolis Dam Navigation Lock. Just like manatees that occasionally enter the lake system, this fish could not find a way out. With the increasing water temperatures and potential lack of food, biologists decided intervention was necessary. A team of about 20 fisheries biologists participated in an effort to capture the sturgeon in hopes of returning it back downriver. Through a complex coordinated effort, the fish was located, captured, and safely returned to the river. Biologists will continue to monitor the fish’s movements and expect to see it return to the Atlantic Ocean soon.