Two men charged with harassment of wildlife May 24, 2017

Two South Carolina men are being charged for the harassment of an alligator after photos were posted online showing the men pouring beer into the juvenile reptile’s mouth. The South Carolina Department of Natural Resources (SCDNR) began investigating the case after the agency received multiple emails and messages from the public on May 25. 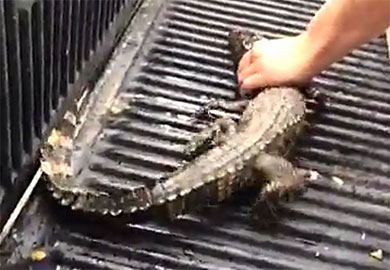 Members of the public took screenshots of the photos posted to social media and sent them to SCDNR.

The incident took place on Wednesday, May 24, on a public dirt road between Hardeeville and Tillman in Jasper County. Joseph Andrew Floyd Jr., 20, of Ridgeland, and Zachary Lloyd Brown, 21, of Ridgeland, admitted to officers that they picked up the alligator after they saw it crossing the road. They then poured beer into the animal’s mouth and took photos to post on social media. According to Floyd Jr., they then released the alligator and watched it swim away in a nearby pond.

"Wildlife conservation is a big part of what SCDNR officers do each day," SCDNR 1st Sgt. Earl Pope said. "This case is a good example of why we strive to educate people about wildlife in hopes that they will respect it."

SCDNR is filing the misdemeanor charge of harassing wildlife through the state's alligator management legislation (Article 5, Section 50-15-500, Subsection C). This charge comes with a maximum fine of $300. The judge who oversees the case in court will determine the men's final punishment.

"Alligators are protected under state law and even federal law where they are still listed as threatened solely due to their similarity of appearance to other endangered crocodilians worldwide," SCDNR Alligator Program Coordinator Jay Butfiloski added.

People who witness the harassment of wildlife should report the incident to 1-800-922-5431.