New size limits and dates in place for Santee striped bass May 7, 2018

Recent changes to state law will extend the period during which striped bass caught in the Santee River system can be kept. The law changes also include additional size/slot requirements for keeper fish.

Anglers planning to fish for striped bass anywhere in the Santee River system between now and June 15 need to be aware of recent changes enacted by South Carolina lawmakers that will affect both the size of legal striped bass they can keep, and the time period during which legal-sized fish can be kept. 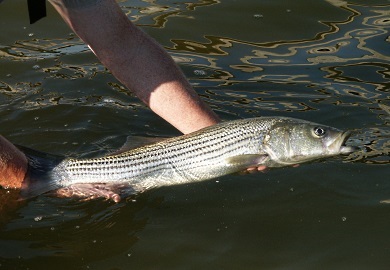 Anglers are encouraged to practice the best catch-and-release methods to minimize stress when releasing undersized striped bass, particularly when water temperatures remain above 70 degrees. Fish should be handled with wet hands and returned to the water as quickly and gently as possible. SCDNR photo

The changes to state law (signed by Gov. McMaster on May 3, 2018 and effective immediately) stipulate that within the boundaries of the Santee River system (including lakes Marion and Moultrie), from October 1st through June 15th, it is “unlawful to take or possess a striped bass less than twenty-three inches or greater than twenty-five inches, provided that one striped bass taken or possessed may be greater than twenty-six inches.”

Practically speaking, what this change in law means is that anglers fishing the Santee system from now until June 15 can still keep three (3) fish, but they must be between 23 and 25 inches, or one of the three may be greater than 26 inches. Previously, the limit for striped bass in the Santee River system during the open period was three (3) fish, all of which had to be at least 26 inches.

The law also extends the legal period for keeping fish for two additional weeks – through June 15. Previously, the waters of the Santee system were closed to striped bass fishing between June 1 and September 30.

The seasonal closure was started in 2008 to reduce the stress-related mortality of striped bass during the warm summer months. Length limits alone cannot protect striped bass during the warm season because catch-and-release stress results in a high rate of mortality, even when handling is minimized. Most striped bass anglers who fish the Santee system have closely adhered to the initial regulations and are acknowledging the positive effects of that sacrifice. The 26-inch minimum size limit has increased the number of fish reaching minimum spawning size and age.

“These changes to the Santee Cooper striped bass limits are the result of collaboration between the South Carolina Department of Natural Resources, the Striped Bass Stakeholder Group and the General Assembly,” said SCDNR Fisheries Chief Ross Self. “The limits and restrictions imposed on the fishery in 2008 had a significant impact on increasing the numbers of stripers in the lakes. This new change will focus harvest on the size fish that are most abundant in the system, provide increased protection for stripers in the reproductive sizes while still allow anglers to keep a bigger, memorable, fish. We expect this change to provide addition improvements for the striped bass fishery and SCDNR staff will continue to monitor the progress of the population’s recovery.”

The bill passed by the South Carolina House and Senate in April and signed into law By Gov. Henry McMaster – in addition to the specific change noted above -- includes amendments to current law that will affect other sections of the S.C. Code of Law that pertain to striped bass fishing and to the geographical boundaries of some waterways. The full text of House Bill 3698, sponsored by Rep. Steve Moss of Blacksburg, Rep. Greg Duckworth of North Myrtle Beach, Rep. Cal Forrest of Monetta, Rep. David Hiott of Pickens and Rep. Bill Hixon of N. Augusta, can be read on the “South Carolina Legislature Online” website at:
https://www.scstatehouse.gov/sess122_2017-2018/bills/3698.htm

The South Carolina Department of Natural Resources is in the process of placing signage at boat ramps and other prominent locations to let the angling public know about the new laws.