“The highest point in the state is a geographical landmark that every South Carolinian, young and old, should have the opportunity to see and enjoy,” said Alvin Taylor, director of the South Carolina Department of Natural Resources (SCDNR). “We hope that the observation tower will be a place where residents and visitors can go to marvel at the view of three states and the Blue Ridge Mountains and to appreciate what a beautiful and diverse place South Carolina truly is.”

To reach the Sassafras Tower (in northern Pickens County): from the town of Pickens, go 15.8 miles north on US 178 to Rocky Bottom. Turn right on F. Van Clayton Memorial Highway and go 4.7 miles to the end of the road. The gravel parking area is on the left.

The Sassafras Tower, designed by Pickens architect Gil Stewart, has a natural stone appearance and sits on the South Carolina/North Carolina line. A compass rose etched into the tower shows the state line as it runs through the structure. The tower sits 11 feet above the mountain’s highest point, and the top of the tower is 44 feet in diameter.

A mobility-impaired trail and ramp, along with a paved road that travels to the top, allows access for people of all abilities, and bathrooms are in place beside the parking lot. On a clear day from the top of the tower, a visitor can see 30-50 miles into the states of South Carolina, North Carolina and Georgia.

In Fall 2010, a group of interested organizations gathered at the Pickens County Museum to discuss the possibility of constructing an observation tower on top of Sassafras Mountain. At that time, the highest point in South Carolina was difficult to find, the road was not good, and so many trees were on the summit that there was barely a view, except in winter. Those conditions on top of the mountain have now changed dramatically with the completion of the Sassafras Tower. 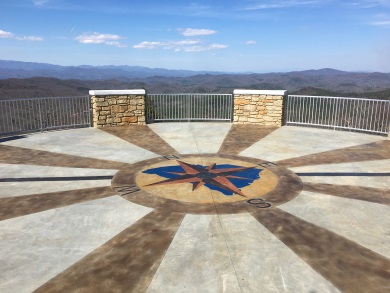 Construction on the $1.1 million Sassafras Mountain observation tower began in November 2017 by Lazer Construction of Anderson, the general contractor for the project. Funding for the observation tower atop Sassafras Mountain came from a variety of sources, including Duke Energy, the Harry Hampton Memorial Wildlife Fund, Pickens County, Felburn Foundation, S.C. Heritage Trust and from hundreds of private supporters through commemorative brick sales.

Poised on the South Carolina and North Carolina border, Sassafras Mountain is about 20 miles north of Pickens. It sits on the Eastern Continental Divide, is the tri-point of three distinct watersheds, and is home to the Foothills Trail, a 77-mile footpath between Table Rock and Oconee state parks. The Palmetto Trail, which will one day link the South Carolina mountains to the sea in a continuous trail of 500 miles, is also on the flanks of Sassafras Mountain.