South Carolina law has established suspension systems based upon the accumulation of points assessed for convictions of natural resource laws.

The Game and Fish Point System applies to violations inland of the saltwater/freshwater dividing line and if suspended under this system, a person cannot hunt, fish, gather, trap, land, or pursue game, fish, crustaceans, or shellfish in the State (including coastal waters out to the three mile limit).

The Saltwater Point System applies to violations within the coastal waters of the State, seaward of the saltwater/freshwater dividing line. The point categories for assessments are recreational and commercial. Points are assessed according to the appropriate category. Upon accumulation of 18 or more points in the recreational or commercial categories, a person’s privileges to fish, gather, land, attempt to take, or possess fish, shellfish, or crustaceans within the coastal waters for the purposes of the affected category will be suspended. Suspensions under the Saltwater Point System do not effect inland freshwater fishing privileges except for shad, herring, and sturgeon which are regulated by coastal laws inland of the saltwater/freshwater dividing line.

Each time a person is convicted of a violation listed in the point systems, the Department must assess the points against the person's record. Half of the points on record are reduced for each full year in which the person receives no points. The Department of Natural Resources must suspend the privileges of any person who has accumulated eighteen (18) or more points.

Table A: Game and Fish Points

Note: Some examples of Item 34 are:

Other less common examples are, but are not limited to, taking game while unlawfully hunting with an electronic call, or killing a turkey with a rifle. The application of item 34 is very broad and examples are given for clarification.

Item 34 applies to unlawfully taking game or fish in a way that is not specifically addressed by the Game and Fish Point System.

Note: It is unlawful for a person whose commercial privileges are suspended under this chapter to be on board any vessel while the vessel is being utilized to take or attempt to take saltwater fish for commercial purposes.

Many laws pertaining to natural resources and boating contain mandatory suspensions. These suspensions start upon conviction and run for specified times according to law. These suspensions will affect privileges and may affect licenses, permits, stamps, tags or registrations. Examples of violations for which suspensions are mandated include, but are not limited to: 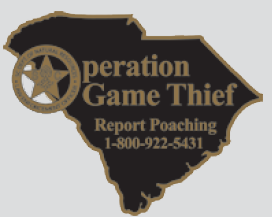 Game and fish law violators steal your wildlife and rob you of tax, license, and business dollars. They cheat you out of recreation and your children out of part of their future. You’re their victim as surely as if they’d robbed your home..

Operation Game Thief is a program designed to stop game and fish law violators in South Carolina. Citizen involvement is the key to the success of the program. You can help in either of two ways: