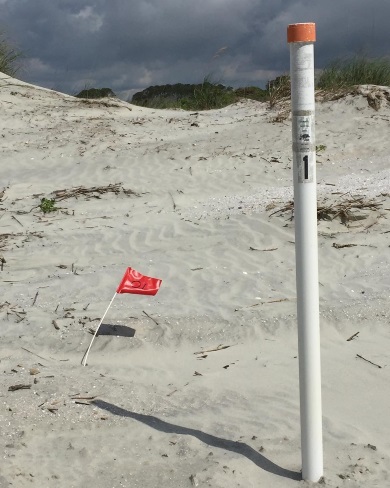 A marker denotes the location of the first sea turtle nest of 2019 for Kiawah Island -- and the state of South Carolina (Photo: Lynne Sager)

The South Carolina Department of Natural Resources (SCDNR) is pleased to report the beginning of the state’s sea turtle nesting season, which opened with two unusual nesting events this week.

Sometime during the night of Thursday, April 25, a loggerhead female came ashore on Kiawah Island and laid the first reported nest of the season, which was discovered this morning by volunteers.

“To my knowledge, this is the earliest we’ve seen a sea turtle nest in South Carolina,” said SCDNR biologist Michelle Pate. “May 1 is the average, but we’ve had a warm winter and several reports of mating loggerheads over recent weeks – so we knew it was just a matter of time."

In addition to the loggerhead nest laid on Kiawah, beach-goers on Hilton Head Island were treated to an even rarer sight this morning – another female sea turtle nesting in broad daylight. When the animal came ashore, volunteers noticed she did not resemble the typical loggerhead sea turtle that nests on South Carolina beaches. SCDNR biologists confirmed that the turtle was in fact an endangered Kemp’s ridley sea turtle.

“This is only the fourth confirmed Kemp’s nest in South Carolina since record-keeping started in the 1970s,” Pate said. “An exciting kick-off to the season, to say the least.”

South Carolina’s official sea turtle nesting season runs from May 1 to October 31 each year. This year’s warm winter prompted the early arrival of sea turtles in South Carolina waters, many in pursuit of cannonball jellyfish and other favorite food items. SCDNR biologists are anticipating a successful year of high nest numbers, following a dip in 2018. 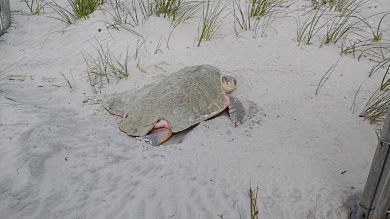 In 2018, volunteers and staff documented 2,767 nests in South Carolina, which represented an unusually low year. That drop was likely due to cyclical nesting patterns, which result in fewer sea turtle nests in some years than in others. Because nesting exacts a high energy toll on the large reptiles, female sea turtles do not come ashore to lay eggs every year.

Sea turtle nest numbers did, however, break records across the Southeast in 2016, including South Carolina, where a total of 6,444 loggerhead nests were laid – the highest number counted since the founding of SCDNR’s sea turtle program in the late 1970s. That’s still a long way from the federal Loggerhead Recovery Plan’s goal of 9,200 nests, but biologists across the region are optimistic that the recent gains represent the beginning of recovery for these threatened reptiles after several decades of conservation efforts.

Volunteers from 30 different nest protection programs will spend the next several months patrolling South Carolina’s beaches each morning for crawls, the telltale tracks left by a female sea turtle as it trundles ashore. Between bright lights, hazardous debris, and natural or man-made obstacles, beaches can be treacherous places for nesting females. Incubating eggs face additional threats, including erosive high tides and predators such as coyotes and raccoons.

Sea turtle clutches average 120 eggs and hatch after approximately 60 days. Nesting females may remain in South Carolina waters and continue to nest every two weeks, laying up to six nests per season. Throughout this stressful time, the turtles also abstain from eating.

South Carolina beachgoers can help the state’s sea turtles by keeping beaches clean, turning beachfront lights out to avoid disorienting turtles, and giving all sea turtles and nests a wide and respectful berth when encountered on the beach.