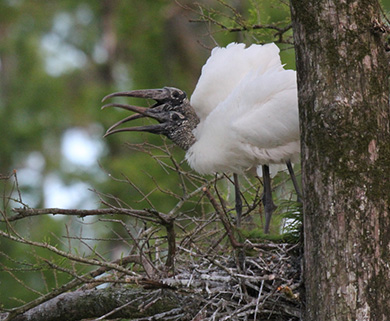 In 2019, South Carolina Department of Natural Resources (SCDNR) biologists and technicians counted the highest amount of wood stork nests ever recorded in the state's history.

The federal recovery goal for wood storks is an average of 1.5 fledglings per nest, and nesting success exceeded the goal this year at all but one of the six index colonies where nests are monitored on a weekly basis throughout the breeding season.

"At Dungannon Plantation Heritage Preserve, wood stork nesting was unsuccessful in the area of the colony where nest monitoring was conducted, but an additional 73 nests were counted later during the season in an unmonitored area of the colony and many of these nesting attempts were successful," said SCDNR Wildlife Biologist Christy Hand.

SCDNR has been surveying the wood stork nests since they began to nest in South Carolina during 1981. More information about SCDNR's Wading Bird Project.