Many animal species benefit from snags, so when safe to do so, leave some standing dead trees 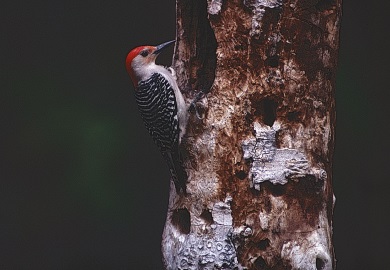 Snags provide secure homes for many kinds of animals and a virtual smorgasbord of insect food. Downy, hairy, red-bellied, pileated and red-headed woodpeckers all feed heavily on wood-boring larvae of beetles and other insects and invertebrates found in snags. (SCDNR photo by Phillip Jones)

Standing dead trees, or snags, may appear to be useless, even eyesores, but they are valuable components of wildlife habitat and are frequently in short supply. They can even be the key limiting factor in a wildlife population.

Snags provide secure homes for many kinds of animals and a virtual smorgasbord of insect food. Downy, hairy, red-bellied, pileated and red-headed woodpeckers all feed heavily on wood-boring larvae of beetles and other insects and invertebrates found in snags. And cavities in snags are the original, natural wood duck nesting “box.” As important as man-made wood duck boxes are, it is not practical to place them in all the swamps and waterways that are potential nesting habitat, but snags are found wherever trees grow.

Woodpeckers are the primary excavators of nesting cavities in snags. These cavities are later used by other species. Bluebirds, wood ducks, titmice, great-crested flycatchers, chickadees, nuthatches, barred owls, screech owls and kestrels all depend on cavities for successful nesting. Often a cavity undergoes a sort of evolution, with successively bigger birds and other animals using them as rot and woodpeckers enlarge them.

In North America, snags provide habitat for at least 85 bird species that nest in tree cavities. Cavities in snags are a critical resource for many species, and cavity-nesting birds can comprise up to 40 percent of the bird community within some forests. In Southeastern North America, about 60 species of birds and mammals, plus many more kinds of reptiles and amphibians, depend on dead and dying trees for roosting, resting, nesting and protection.

Mammals such as bats, gray squirrels, fox squirrels, flying squirrels, raccoons and opossums use cavities in snags, as do frogs, snakes, lizards and certain life stages of aquatic invertebrates.

The value of snags to both wildlife and people is often unrecognized. Many snag-dependent species control insects and pests, and birds of prey prefer the vantage point snags afford for hunting rodents. The woodpecker's diet is filled with many insects that can be harmful to our interests.

There are two kinds of snags. A “hard” snag may be only partially dead, with many limbs remaining and sound wood. This kind of snag will be beneficial for many years. A “soft” snag is more decayed, with no limbs left and advanced heart rot. Wildlife species make use of both kinds of snags, but larger snags tend to have more value. The beautiful scarlet kingsnake likes to hide under the bark of large, recently dead pine trees, while native bees that provide vital pollination make nests deep inside snags that have deep, dry beetle cavities.

At least four to five snags per acre is a good number to aim for. Snags left in open areas over water will also provide hunting perches for flycatchers, bluebirds and kingfishers. Osprey may nest in large snags near open water. Snags that are very near firebreaks, trails and roads, or homes and other structures, may need to be carefully removed for safety reasons, but when they are not hazardous, they provide wonderful wildlife viewing opportunities.

Snags can be a problem near firebreaks, even when they are outside the burn unit, since they can catch fire and throw sparks or flaming debris into other areas. Sometimes these snags must be cut, but often they can be safely raked around and/or wet down to keep them from igniting. Leaning or very “soft” snags are better enjoyed from a safe distance, and when they are hazardous and need to be removed, it is important to seek professional or other experienced help.

The Father of Wildlife Management, Aldo Leopold, encouraged people to embrace the beauty in nature as an essential part of his famous land ethic. Beauty in nature is a matter of emotions, and those emotions are triggered not only by what we perceive with our senses, but by knowledge such as natural history and experience. Awareness of the benefits of snags, and the enjoyment of watching wildlife (especially enjoyment shared with others) that uses these dead or dying trees can lead to a new level of aesthetic appreciation for this vital part of a healthy forest, woodland or savanna.

Wildlife enthusiasts and land managers should take a second look at dead or dying trees on their property and include snags in their wildlife management, prescribed burning and landscaping plans.

To view or print out a wildlife management guide on snags and downed logs, visit the SCDNR website at /wildlife/publications/pdf/snags.pdf or call the Columbia SCDNR office at (803) 734-3886.

Johnny Stowe, a Registered Forester and Certified Wildlife Biologist, is an award-winning author who has managed SCDNR heritage preserves for 23 years.