When all the points were tallied and the last dog rounded up at the end of the night following the annual South Carolina Youth Coon Hunting Championship at the S.C. Department of Natural Resources’ James W. Webb Wildlife Center in Hampton County, Jace Shuler of Orangeburg (Senior Division) and Sly Stone of Johnsonville (Junior Division) took home the first place trophies. George Agner of Edgefield took home the Senior Division Sportsmanship Award, and the Junior Sportsmanship trophy was awarded to Caleb Smith of Branchville

The annual State Championship hunt, organized by the South Carolina Coon Hunters Association and hosted by the SCDNR, is the culmination of a series of regional competitions held throughout the fall and winter and sponsored by coon hunting clubs across the state. This year’s hunt also marked the 25th anniversary of this annual event where hound hunting enthusiasts and their families come together at the Webb Center to celebrate the values of fellowship, good sportsmanship and continue the storied heritage and tradition of chasing raccoons through bottomland river swamps. Prior to the hunt, SCCHA President David McKee of Whitmire, S.C., was honored for his 25 years at the helm of the organization that works to keep this traditional sport alive and thriving. Holding a state championship hunt at the Webb Center was the brainchild of McKee and former SCDNR wildlife biologist Buddy Baker.

“This has been a great joint effort,” said McKee. “Keeping these kids hunting and keeping them in the woods, so they can have the same opportunities we did is the goal.” 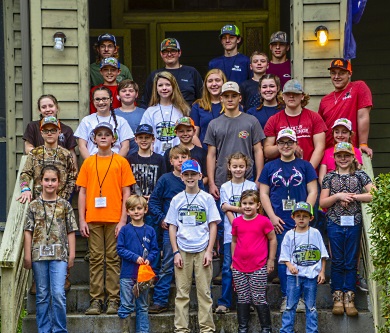 Participants in the 2019 S.C. State Youth Coon Hunt Championship pose for a group photo on the steps of the historic lodge at the SCDNR's James W. Webb Wildlife Center. [SCDNR photo by D. Lucas]

Both the regional club-sponsored qualifying hunts and the state championship hunt are designed to teach the participants ethics and sportsmanship through participation in low-intensity competition. The top two hunters in each age bracket (Juniors: 12 and under, and Seniors: 13-17) and the Sportsmanship Award winners in each age group qualify for the state championship hunt. Two $500 scholarships are awarded at the South Carolina Youth Championship hunt for the first-place finisher in each age group. Additional $500 scholarships are awarded based on participation in the qualifying regional hunts. This year’s “points race” scholarship winners were Hunter Seymore of Anderson (Junior Division), and Jace Shuler of Orangeburg along with Hanna Stearn of Santee (tie; Senior Division).

Competitors in the series are allowed to hunt in as many regional youth hunts as they choose, and all events are free of charge. In accordance with competition hunt rules, no raccoons are killed during the competition and guns are not allowed on the hunt. Points are awarded by judges based upon the order that the contestants interpret their dogs’ barks to identify when the dogs strike a raccoons’ trail and when their dogs have treed a raccoon. Proceeds from the sale of SCCHA personalized license plates fund the organization's scholarship program. For additional information about the scholarships or other programs of the SCCHA, visit the group’s website at: www.sccoonhunters.com.