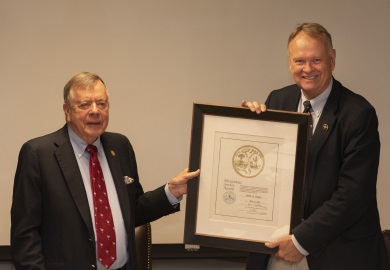 After a total of 42 years on the job serving the citizens of South Carolina in various capacities, South Carolina Department of Natural Resources (SCDNR) Director Alvin Taylor handed over the agency reins to SCDNR Deputy Director for Marine Resources Robert Boyles.

Boyles, who assumes the interim director position on May 16, has worked in the SCDNR’s Marine Resources Division for 22 years. He brings a wealth of scientific and conservation experience to this position as the SCDNR Board of Directors begins the search for a permanent agency leader.

“We have been very fortunate to work with a leader like Alvin Taylor for seven years,” said Norman Pulliam, chairman of the SCDNR’s Board of Directors. “He has taken the agency to the next level, and I will miss him, but I am also very excited that Robert Boyles has accepted the interim director’s position.”

Taylor’s career with the state’s natural resources agency began in law enforcement where he rose to the top rank of Colonel before accepting the position as the agency’s director in 2011. He served in that role for seven years, where his accomplishments included reviving a struggling agency after staggering budget cuts followed by lean years, building a youth shooting sports program and acquiring additional lands for public recreation and conservation. His awards and special recognitions tell a story of a man who worked tirelessly behind the scenes making good on his own personal sense of commitment to the agency and the people of South Carolina.

“Alvin Taylor was the right man for the job,” Pulliam said. “He served the agency with honesty and integrity. You can’t ask for any more than that.”