Look out for manatees as they return to coastal waters 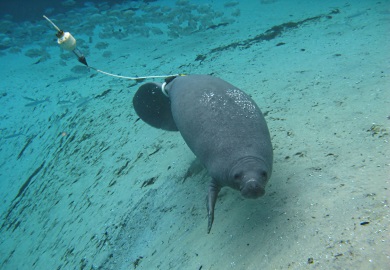 This manatee is outfitted with a belted satellite transmitter, which provides important information about a manatee's travels to biologists. (Photo: Clearwater Marine Aquarium Research Institute)

As manatees return to their summer haunts along the coast, South Carolina Department of Natural Resources (SCDNR) and U.S. Fish and Wildlife Service (USFWS) biologists are reminding residents and visitors to be particularly alert while boating and to report sightings of these gentle giants online.

Manatees, or sea cows, are large marine mammals that reach around 10 feet in length and weigh up to a ton. They're warm-weather visitors to South Carolina, typically arriving in May and leaving by November, when water temperatures drop below 68 degrees Fahrenheit. Because of the difficulty of counting them in murky waters, South Carolina's manatee population is currently unknown – but it's a small fraction of the United States' estimated 6,600 animals, most of which remain in Florida. Due to federal and state protections, it's illegal to hunt, play with or harass manatees, which includes touching, providing water to or attempting to feed them.

Biologists with the Clearwater Marine Aquarium Research Institute are tagging rescued animals in an effort to study their migration habits outside the state of Florida. A number of manatees, some familiar to South Carolina’s waters, have already begun to make their way north out of Florida, including ones bearing satellite transmitters. Tagged manatees wear a "belt" around the base of their tails and trail a floating satellite transmitter that collects and sends information about the animal's location (see photo). The tags are harmless to the animal and designed to break free in case of entanglement. Officials ask that members of the public do not pull or tamper with these tags – they're providing valuable information to help wildlife researchers better understand and protect these mammals.

There are a number of ways members of the public can help South Carolina's manatees. SCDNR staff encourage anyone to report sightings and provide photographs (if possible) of live manatees online. Photographs of scars on manatees' backs and tails are particularly useful, because they can often be used to identify previously known individuals. However, manatees should never be approached by boat to obtain pictures.

Collisions between boaters and manatees are more likely to occur in shallow waters, particularly around docks and at the edge of marshes where manatees feed. Staying alert, following safe boating practices and maintaining lower speeds in these areas can reduce the risk of a collision. Boaters should also watch for manatee backs, tails, snouts and "footprints" – a series of round swirls on the surface caused by a swimming manatee's tail.

Injured or dead manatees should be reported immediately to the SCDNR wildlife hotline at 1-800-922-5431. If a boat accidentally collides with a manatee, SCDNR biologists ask that the boater stand by and immediately contact SCDNR or the U.S. Coast Guard on VHF Channel 16. Doing so provides biologists the best chance to help the animal and gather valuable scientific data.

In addition to reporting sightings, coastal residents and visitors can help manatees by staying alert while on the water and avoiding harmful interactions with the animals.

"Feeding and watering manatees encourages the animals to spend time at docks and marinas, making them more susceptible to boat strikes," said USFWS biologist Melanie Olds. "In addition to being one of the main causes of mortality for manatees, it is also illegal." The manatee is protected under federal law by the Marine Mammal Protection Act of 1972 and by the Endangered Species Act of 1973, which makes it illegal to harass, hunt, capture or kill any marine mammal. Conviction at the federal level is punishable by fine of up to $50,000 and/or one year in prison.

For 44 years, the Florida manatee was protected as "endangered" under the federal Endangered Species Act. In March of 2017, as a result of increasing numbers and improving habitat, USFWS reclassified their status as "threatened." Manatees are still protected under federal and South Carolina law and face a number of threats on their continued path to recovery. The greatest dangers to the species include boat strikes, entanglement in fishing gear and harmful algal blooms known as red tides.

Tips for being manatee friendly in South Carolina: