The difference between wild and domestic turkeys 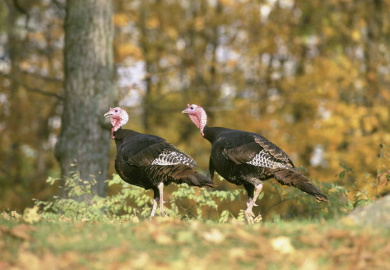 While sitting down to enjoy turkey during the Thanksgiving holiday, remember that although wild and domestic turkeys are genetically the same species, that’s about where the similarity ends.

“The wild turkey in a sprint can outrun a galloping horse for a short distance,” said Charles Ruth, Big Game Program coordinator for the S.C. Department of Natural Resources (SCDNR). “Although it is one of the largest game birds, weighing up to 25 pounds, it can fly distances of more than a mile, sometimes at speeds of 55 miles per hour.”

Don’t ask a barnyard bird to try any of those feats! The domestic turkey lost its ability to fly through selective breeding that created heavier, broad-breasted birds, a feature much desired by chefs and commercial turkey producers. The shorter legs of the domestic turkey also mean it can’t run as well as its wild cousin.

In contrast to the heavier domestic bird, the wild turkey is slim, tall and long-legged. Factor in its keen eyesight, hearing and native cunning, and the wild turkey makes a difficult target for human and animal hunters alike.

Restoration of the wild turkey in South Carolina is one of the Palmetto State’s most noteworthy conservation success stories. Limited by the early 1900’s to small pockets of birds in the Lowcountry’s Francis Marion National Forest and along the Savannah River swamps, the wild turkey is now widespread throughout South Carolina and a spring hunting season is held in all of the state’s 46 counties (there is no fall season). Wild turkey restoration was made possible through the efforts of the SCDNR, the National Wild Turkey Federation, the forest products industry, private landowners, and South Carolina sportsmen and sportswomen.

Spanish explorers took Mexican wild turkeys domesticated by the Aztecs home to Europe in about 1519. These now domesticated turkeys then spread rapidly through Europe and were introduced in England between 1524 and 1541, where they were highly sought after for gourmet dinners.

After the domestic turkey spread across Europe in the 1500s, the colonists who settled the New World brought these tasty birds with them across the Atlantic back to the land of their origin. Imagine the pilgrims’ surprise to find the turkey already one of the most plentiful foods of the American Indians.

Domestic stock from Europe was eventually crossbred with the wild turkeys of North America, leading to the six most common standard domestic varieties in the United States: Bronze, Black, Narranganset, Bourbon Red, Slate and White Holland.

While the attributes of wild turkeys have been historically important in enhancing domestic breeds, the flow of genetic material in the other direction is not encouraged. State law prohibits the release of pen-raised turkeys due to the possibility of introducing disease into wild birds and because of the danger of contaminating the wild turkey gene pool.