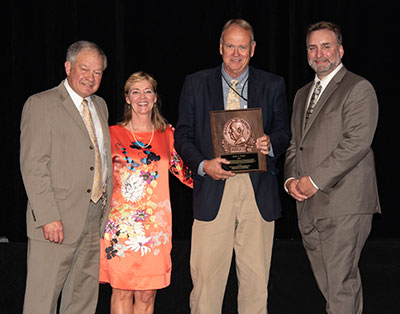 The award is the highest honor bestowed by the association and is presented to the career individual who, in the opinion of the Award Committee, has made the greatest contribution to wildlife or fish conservation during the previous year or years.

Director Taylor retired earlier this year after almost 42 years of service with SCDNR, serving as director of the agency from March 2012 until May 2019.

"Alvin is filled with integrity, believes in doing what is right and always wants what is best for our Department and its employees,” said Interim SCDNR Director Robert Boyles. "He is respected and admired not because of his title and accomplishments, but because he truly cares about the people and natural resources of our state."

"Director Taylor has a long history of serving in leadership positions within SEAFWA including a recent tenure as association president," said SEAFWA President Chuck Sykes. "Through these roles, he has positively impacted policies and programs at the state, regional and national levels. We believe this award is the perfect way to celebrate and honor his career-long achievements and commitment to natural resources.”

According to awards committee chairperson, Emily Jo Williams, Vice President of Migratory Birds and Habitats for the American Bird Conservancy, Director Taylor exemplifies the qualities and spirit of this prestigious award.

“We received a number of excellent nominations for the 2019 award from every sector of our southeastern conservation community including wildlife, fisheries, law enforcement, administration and research,” Williams said. “Although our decision was difficult given the qualifications of so many incredible professionals, we were blown away with Director Taylor’s contributions to the South Carolina DNR and the Southeastern Association of Fish and Wildlife Agencies.”

These accomplishments followed a long career with the agency’s Law Enforcement Division, where he served as Deputy Director from July 2004 until May 2012. During his law enforcement career, Taylor was at the forefront of boating safety and led the charge to establish comprehensive boating safety laws in the state. For those efforts, he was awarded the Lifetime Achievement Award from the National Association of State Boating Law Administrators in 2014.

Throughout his entire career, Director Taylor has demonstrated an understanding that outreach efforts and getting young people involved in traditional outdoor pursuits are critical to the future of conservation. Under his leadership, SCDNR experienced the largest expansion of outreach programs in its history. Through programs such as the National Archery in the Schools Program, Take One Make One, Scholastic Clay Shooting Sports, and middle and high school bass fishing clubs, the agency interacts with more than 170,000 youth each year – not including the constituents impacted through shooting range expansions and the establishment of the agency’s Hispanic Outreach program.