Drought conditions improve for much of the state

The South Carolina Drought Response Committee, which is comprised of representatives from multiple state and local agencies, met via conference call to review the drought status for all counties According to Hope Mizzell, S.C. State Climatologist, increased rainfall over the last two weeks brought some relief from the drought. The committee is cautiously optimistic, but it is going to take more than two weeks of normal rainfall to see significant improvement in the overall drought status.

Charleston County was downgraded to no drought.

Berkeley, Marlboro and Dillon counties were maintained at incipient.

Williamsburg, Georgetown, Marion and Horry counties were maintained at no drought. 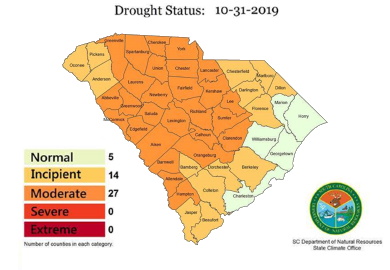 According to Priyanka More, SCDNR Hydrologist, streamflow levels have notably increased in several counties in the upper Savannah basin and along the coast, supporting the downgrade in drought status from moderate to incipient for these areas.

"Although we've had a few days of rainfall, our overall situation has changed very little," said Mike Hancock, Lugoff-Elgin Water Authority General Manager. "Groundwater, agriculture and forestry conditions indicate we have a long way to go before any significant drought relief."

Recent rainfall has helped moderate fuel conditions and wildfire danger for most of the state, but just a few days of drying could easily bring fire danger back to the forefront, according to Darryl Jones, Forest Protection Chief at South Carolina Forestry Commission.

"The early part of October was very busy for wildfire activity, and we had more than double the number of wildfires in the state based on our 10-year average," said Jones. "We do want to encourage everyone to be extremely careful when conducting outdoor burning. More than half of the wildfires in South Carolina every year start when a backyard burn escapes."

Unfortunately, the rain came too late for some farms.

John Irwin, retired Clemson University Extension Animal Scientist and Laurens County beef producer, stressed to the committee that the drought has already taken its toll on forage production, forcing farmers to plant fall and winter grazing at an accelerated rate.

"The success of the fall grazing is weather dependent and we need a continued pattern of normal rainfall and moderate fall temperatures," said Irwin.

The committee will continue to closely monitor the drought and reconvene in the next three to four weeks unless conditions deteriorate.