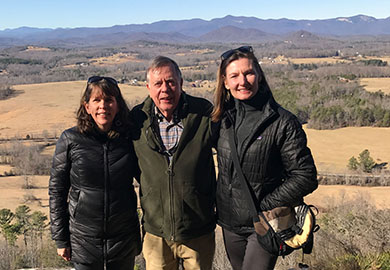 Norman Pulliam of Spartanburg has been honored by Upstate Forever in Greenville with the Tommy Wyche Land Conservation Champion award for his visionary leadership as the board chair of the South Carolina Department of Natural Resources (SCDNR).

The award was presented Feb. 24 at the ForeverGreen Annual Awards Luncheon, held at Embassy Suites in Greenville, where conservation organization Upstate Forever honored exceptional individuals for their contributions to conservation and sustainability in the Upstate.

Pulliam was appointed to the SCDNR Board of Directors by Gov. Mark Sanford in 2006 and was appointed chair by Gov. Henry McMaster in 2017. During his tenure as chair, Pulliam has overseen, and in some cases directly shepherded, several critically important conservation projects in the Upstate, including:

As SCDNR board chair, Pulliam holds an ex officio position on the South Carolina Conservation Bank Board and also worked extensively on the successful reauthorization of the Conservation Bank, culminating in it being made a permanent agency in 2018.

Pulliam and his wife, Jo, also hosted a gathering at their home on behalf of Upstate Forever, prior to the launch of the "Crossroads Campaign," further solidifying Upstate Forever's presence in Spartanburg and enhancing the organization's ability to continue protecting critical lands in the Upstate.

Named after visionary conservationist Tommy Wyche, the award that Pulliam received recognizes a business, organization or individual who has made a significant contribution to the protection of forest lands, natural areas, farmlands or other special places in the Upstate.