Update on April 7, 2020 - This event has been cancelled until further notice. 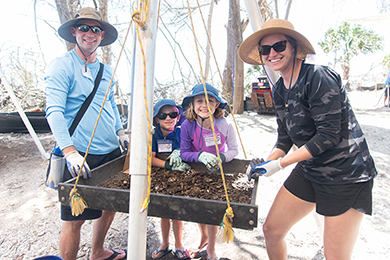 The public is invited to join the South Carolina Department of Natural Resources (SCDNR) Archaeology team as they conduct excavations at Pockoy Island, located on Botany Bay Plantation Heritage Preserve. Archaeological excavation will take place from Friday, May 1 through Saturday, May 23, 2020. The site will be open to the public throughout the season from 10 a.m. until 4 p.m. on Wednesday through Saturday each week. The site is closed to the public on Sunday, Monday and Tuesday.

Guided public tours of the site are offered at 10 a.m., 1 p.m. and 2 p.m. The public can pre-register for tours at https://www.eventbrite.com/e/guided-tours-of-the-pockoy-island-archaeological-excavation-tickets-84750074755.

The public can also volunteer to help sift for artifacts throughout the field season. Pre-registration for volunteers is available at https://www.eventbrite.com/e/volunteer-at-the-pockoy-island-archaeological-excavation-tickets-85202957339.

Groups of 10 or more who wish to visit the site may register at https://www.surveymonkey.com/r/TV68NHF.

The Ring People, a documentary film produced in 2019, takes viewers to remote archaeological sites, including Pockoy Island, as scientists discover more about monumental rings of shell constructed during the Late Archaic period by American Indians. The Ring People and other SCDNR Archaeology documentary films can be found at http://heritagetrust.dnr.sc.gov/films.html.

For more information about the May 2018 field season at Pockoy Island, visit http://www.scwildlife.com/articles/septoct2018/TheShellRingsofPockoy.html.

Directions to the preserve can be found on the Botany Bay Plantation Heritage Preserve website: https://www2.dnr.sc.gov/ManagedLands/ManagedLand/ManagedLand/57.

The Pockoy Island Shell Ring Complex (Pockoy 1 and Pockoy 2) are the latest archaeological discovery on Botany Bay Plantation Heritage Preserve, a SCDNR managed area on Edisto Island. The rings were found using Lidar in 2017. Pockoy 1 is the oldest known shell ring in South Carolina – dating to the Late Archaic period, approximately 4,300 years ago. That’s the same time period as the construction of the first Egyptian pyramids!

While the two shell rings are considered one archaeological site, recent excavations have focused on Pockoy 1 since it is experiencing a rapid rate of erosion – about 9.5 meters per year.

The Pockoy Island Shell Ring Complex is among thousands of coastal archaeological sites threatened by sea level rise. It is because of this threat that Pockoy is considered an example of Heritage at Risk – a global term used to define cultural resources threatened by natural and human impacts.

For nearly 70 years, Botany Bay Plantation has experienced one of the highest rates of erosion in coastal South Carolina. The shoreline has moved as much as three quarters of a mile inland in some locations.

Within the Southeastern United States, more than 19,000 recorded archaeological sites will be submerged by the end of the century with a one-meter rise in sea level. Unfortunately, Pockoy 1 will be gone by 2024. Rapid archaeological investigation of this site is critical as it is under immediate threat of being lost.

Pockoy 1 is one of the most intensely investigated shell rings in the world. Excavations of Pockoy 1 began in July 2017 with shovel testing and probing of the site. Shovel test pits (STPs) were excavated by hand every 10 meters across the site, and each STP was 30 centimeters in diameter and one meter deep. These STPs helped SCDNR archaeologists determine where larger excavation units and trenches should be located for future field seasons.

Probing through the shell used to construct Pockoy 1 over 4,000 years ago helped SCDNR archaeologists determine the thickness and diameter of the shell ring. Pockoy 1 is in the shape of a donut, and measures about 60 meters across and 60 centimeters at its thickest point. The center of this donut-shape is void of shell and is called the plaza. Excavations in May 2018 focused on the west side of the shell ring into the plaza, while excavations in December 2018 focused on the plaza itself.

During the May 2019 field season, while SCDNR archaeologists expanded their excavations of the Pockoy 1 plaza, they were joined by over 400 volunteers and nearly 1,400 visitors. They were also joined by other teams of archaeologists who assisted in laying the groundwork for future archaeological investigations of the island. Mississippi State University archaeology staff and students conducted an STP survey of Pockoy Island in order to determine artifact patterns across the island. Archaeologists from the National Park Service Southeastern Archaeological Center also joined the team to conduct probing of Pockoy 2 to determine the shell ring’s diameter and thickness. Pockoy 2, like Pockoy 1, is in the shape of a donut, but measures approximately 80 meters across and 45 centimeters at its thickest point.

During the May 2020 field season, SCDNR archaeologists will focus on expanding their investigations of the Pockoy 1 plaza and northern portions of the shell ring. They will be joined by Indiana University of Pennsylvania staff and students who will conduct an archaeological field school on Pockoy Island.

Dates from some of these samples suggest that Pockoy 1 was constructed and occupied over a relatively short period of time, within 20 – 100 years. But there are so many more questions to answer including – Why were the Pockoy Island Shell Rings constructed? Are they connected to a larger network of shell ring communities across the Southeastern United States? Were they created for a ceremonial purpose, or the result of subsistence activities? Time is running out to gather information to answer these and many other questions that can help archaeologists add to our shared cultural heritage and human history.