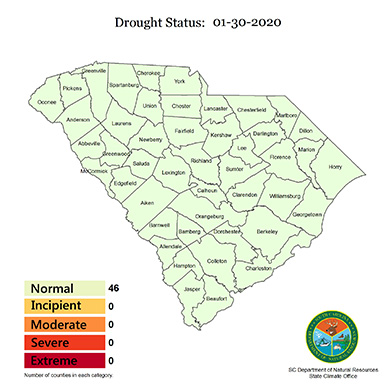 The S.C. Drought Response Committee met Thursday, January 30, via conference call to update the drought statuses of all counties in South Carolina. Due to above average rainfall totals statewide during December and January, it was a quick decision and a unanimous vote to remove the drought status of 27 counties.

"South Carolina has been dealing with drought since May 2019," said S.C. State Climatologist Hope Mizzell. "Last year's drought brought significant impacts to agriculture, low streamflows and increased wildfires. It is good news to see all drought indicators return to normal."

Conditions across much of the state had already improved somewhat during the fall, and heavy rains beginning in December brought relief to the remaining 27 counties. In fact, December's statewide rainfall totals placed it among the top ten wettest Decembers on record in South Carolina. December's statewide total was 6.74 inches, which is 3.13 inches above normal and makes it the 118th wettest December in the 125 years that records have been kept. Individual station totals for December ranged from 13.75” at the Charleston 5.4 SSE (CoCoRaHS station) to 4.67” at Anderson FAA Airport. The majority of the State has received normal to above normal rainfall also in January.

Frank Alsheimer, Science and Operations Officer with the National Weather Service in Columbia, briefed the Committee that no extended dry spells are on the horizon. Forecasts indicate periodic rain over the next few weeks, as an active jet stream will continue to bring moisture into the southeastern United States.

The committee will continue to monitor the weather and will meet again as conditions warrant. More information about drought conditions and drought policy in South Carolina is available via the South Carolina Drought Portal at www.scdrought.com