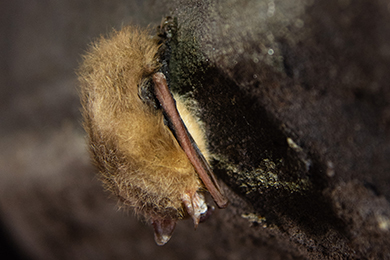 South Carolina is home to 14 different bat species, but some populations are rapidly declining due to White Nose Syndrome.

Jennifer Kindel, the bat biologist at the South Carolina Department of Natural Resources says since the disease was first detected in South Carolina at Table Rock State Park in 2013, there has been a 94% decline in Tri-colored bat populations in the two largest known hibernacula in the state.

"The disease is caused by a fungus that infects the bats while they're hibernating," said Kindel. "When the bats are sleeping and they have all their fat reserves, they're ready to go for the whole winter. But when the fungus wakes them up from their skin being infected, then they wake up and burn off all their reserves and they end up dying from starvation."

In February, staff with SCDNR surveyed a cave within Stumphouse Mountain Heritage Preserve hoping to see positive results, but only seven tri-colored bats were found in the cave this year, and one of those showing the signs of the deadly disease.

To put it in perspective, in 2012, 401 tri-colored bats were found. And only five years later in 2017, White Nose Syndrome showed how destructive it really is—leaving only 12 tri-colored bats to be counted the same cave.

"How quickly that population declined in that short period of time is pretty devastating," Kindel added.

While biologists are working diligently to save bat populations across the world, there are some things the public can do to help prevent the spread of the disease.

"If you go into a cave not knowing the fungus is there, you can inadvertently carry it out and move it on to another site. If you're a caver, there is a national decontamination protocol that they can follow to be sure that once they come back out again, they can clean all their gear in a way that will minimize the spread and hopefully eradicate the possibility of spreading the disease," said Kindel.