The Committee upgraded those six counties to "Incipient" drought status at their June 9 meeting, due largely to the very dry spring (March – May) that lowered soil moisture and streamflow levels in parts of the state's Central and Northeastern Drought Management Areas (the Santee and Pee Dee Basins). After reviewing conditions today, the Committee decided that the recent active weather pattern -- including the rainfall from Tropical System Claudette -- was enough to alleviate the drought for this area of the state and maintain the no drought or "Normal" status for all other counties.

County Executive Director for the Williamsburg County Farm Service Blake Badger said, "Recent rains have relieved stress on crops. Much of the corn crop would have experienced greatly reduced yields if the rain had come one week later. Producers are wide-open finishing up the planting of soybeans in fields that were too dry to plant just a few weeks ago. While it wouldn’t take more than a week or two of hot, dry weather to see crop conditions diminish, most producers are happy with field conditions as they stand."

Leslie Woodham with the SC Forestry Commission Fire Staff reported that the state has experienced few forest fires in past weeks.

" [We] haven’t had too many forest fires recently," said Woodham. "Even areas that were in the incipient stages of drought have remained relatively fire free due to higher humidities and the green-up of vegetation."

Committee members from the four Drought Management Areas reevaluated conditions statewide and all agreed that there was no support for a drought declaration at this time.

There are a few isolated locations that have reported less than 3 inches of rain over the last 30 days, but for most of the State the rainfall has ranged from 4 to 10 inches (see chart below). 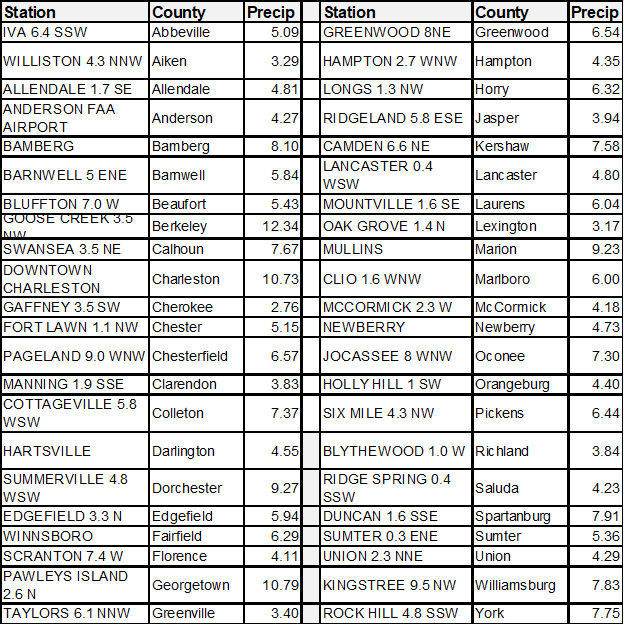