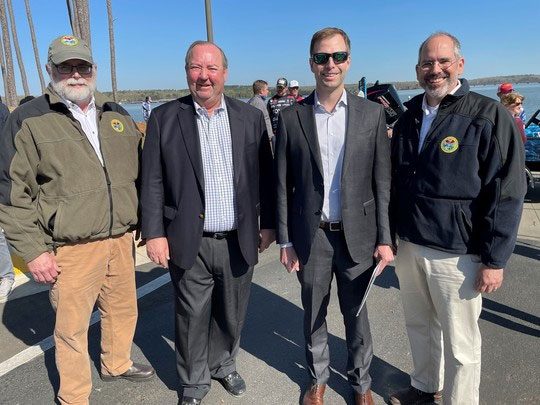 The S.C. Department of Natural Resources (SCDNR) director said the return of the Bassmaster Classic to Lake Hartwell for a fourth time is a testament to the power of partnerships and to world-class fisheries available in the Palmetto State.

"This is an historic announcement," said Robert H. Boyles Jr. "We offer our congratulations to Anderson and Greenville in helping to bring attention to South Carolina's world-class natural resources and the economic impact that those resources provide."

"We're excited to have the Classic come back," said Ross Self, SCDNR Freshwater Fisheries chief. "It's the recognition of the quality of our fisheries and the work that our staff does, and it helps to draw attention to fishing around the state. Folks want to fish where the pros fish."

Self said in 2020 Bassmaster named Lake Hartwell as one of the nation's Best Bass Lakes of the Decade, based on tournament catch records and information on how agencies like SCDNR manage major reservoirs in their states for both bass and other popular species.

Next year's event will mark the fourth time the Classic has been held on Lake Hartwell, which will tie it with Lay Lake near Birmingham, Ala., for hosting the most Classics.

B.A.S.S. Chairman Chase Anderson said the economic impact of the Bassmaster Classic to the Anderson/Greenville area in 2018 was estimated at $24 million. B.A.S.S. has held 14 events at Green Pond Landing & Event Center since its opening in late 2014, according to Anderson, and the events have generated an estimated $56 million in economic impact for the area.

Anderson said it took "great foresight" to build a facility like Green Pond Landing. SCDNR helped direct more than $3.5 million across the last eight years to support development of the Green Pond project. The funds came from a combination of Hartwell PCB settlement funds, the Sportfish Restoration Boating Access Fund and from Water Recreation funds.