The S.C. Department of Natural Resources (DNR) deployed 36 armored personnel carriers on Sept. 4 off the coast of Beaufort/Hilton Head at the Betsy Ross Reef, then moving to the Eagle's Nest Reef.

The DNR Artificial Reef Program works with S.C. Army National Guard to deploy surplus equipment, such as armored personnel carriers and shipping containers, onto artificial reef sites along the coast. This unique partnership, Reef-Ex, has taken place since 1997.

Marine artificial reefs are constructed in South Carolina primarily to enhance saltwater fishing opportunities for recreational anglers, and to provide additional locations of interest for the growing number of sport divers in the state. Nearly 20 square miles of ocean bottom have been permitted for this purpose with the added benefits of adding to the amount of highly productive hard bottom off the coast as well as potentially enhancing fish stocks which are critically linked to this type of habitat. 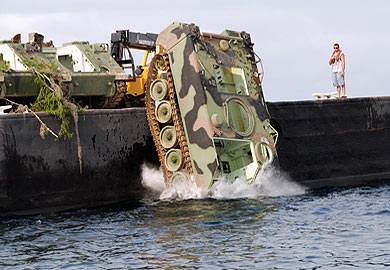 Thousands of resident and nonresident anglers and sport divers take advantage of the numerous artificial reefs off the state each year. They pursue a wide range of year-round fishing and diving activities which might not be available off South Carolina were it not for artificial reefs. In the pursuit of their interests these individuals generate over 83 million dollars in total economic benefit to the state each year. While not the primary reason for building the state's marine artificial reefs, this economic benefit from their existence adds significant weight to the overall cost-effectiveness of the efforts involved in maintaining a reef system.

While naturally occurring reefs may be common in tropical climates throughout the world, they do not exist in the waters of the continental United States above the southern tip of Florida. Off the southeastern coastal states from North Carolina to Florida, this type of coral reef habitat is replaced by what biologists and fishermen term "hard-bottom" or "live-bottom" areas.

These more temperate reef communities occur only in specific locations on the ocean bottom where nature has provided a suitable hard substrate, usually in the form of limestone rock out-croppings, which serve as a point of attachment and colonization for sponges, corals and a wide assortment of other invertebrates. In some cases where significant rock is exposed through the otherwise sandy bottom, vertical relief and ledges add to the complexity of this habitat and provide additional space and homes for many other reef inhabitants.

Off South Carolina, the majority of the continental shelf is covered with sand several feet deep, while only about 5 to 10 percent of the bottom has the appropriate geological makeup to allow for the formation of a reef community.