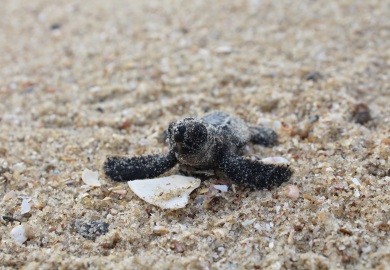 Standardized surveys on index loggerhead nesting beaches in South Carolina from 1982-2016 indicate an upward trend in nest count numbers in six of the last seven years.

"Annual fluctuations in nest counts are expected, but this upward trend is an indication that we are seeing the beginning of recovery for the loggerhead species," said Michelle Pate, SCDNR sea turtle program coordinator. To date, the agency's program has helped more than 7 million hatchlings reach the Atlantic Ocean, contributing significantly to loggerhead conservation efforts.

This year marks the seventh year SCDNR biologists have participated in a multi-state project using genetics to answer several basic loggerhead sea turtle nesting questions. Other participants include the Georgia Department of Natural Resources, The North Carolina Wildlife and Resources Commission and the University of Georgia. Researchers are using genetic fingerprinting to identify individual loggerhead nesting females, how many nests they are laying each year and how long they go in between nesting years. This information will provide a more accurate census of the female nesting population. To date, 1,421 and 1,144 unique females have been identified from the 2015 and 2016 seasons, respectively. You can follow the progress of this study on our genetics web page hosted on SeaTurtle.org.

In addition to nest monitoring and protection, sea turtle stranding response and necropsies (post-mortem examinations) are also important components of SCDNR's sea turtle work. To date in 2016, there have been 202 sea turtle strandings (sick, injured or dead animals) reported in South Carolina. Fifty-eight were alive at the time of stranding. SCDNR transports sick and injured live turtles to the South Carolina Aquarium for rehabilitation. Eighteen sea turtles stranded alive this year have been rehabilitated and released. Dead turtles are necropsied to understand probable causes of death, foraging habits and sex.

To keep up with sea turtle conservation in South Carolina, please visit our website.