Many species and ecosystems require fire periodically to ensure their survival, and that's why prescribed burns are conducted on many of the S.C. Department of Natural Resources' heritage preserves.

"The objective of prescribed burns is to maintain the ecological integrity of these lands," said Johnny Stowe, S.C. Department of Natural Resources (DNR) wildlife biologist, forester and heritage preserve manager, "and to provide for human safety by reducing the amount of fuel on the preserves, thereby reducing the chance of catastrophic wildfire. For many of these ecosystems, it's not a matter of 'if' they will burn, but rather 'when.' We like to choose the 'when.'" 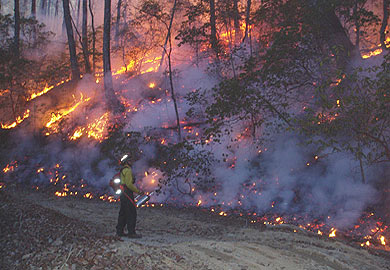 "Prescribed fire is a multi-cultural tradition and ritual and a key part of our heritage in South Carolina," Stowe said. "The Indians burned here for thousands of years, and both African and European immigrants brought with them from their native lands a long established history of using fire to manipulate the landscape.

"Through the centuries, many native plants, animals and habitats in the Southeastern United States have adapted to the presence of recurring fire," Stowe said. "Many species and ecosystems are now rare because of fire suppression, and they actually need fire to ensure their survival." Fire can produce superior habitat for species such as wild turkey and white-tailed deer, and is practically essential for bobwhite quail as well as rare species like the red-cockaded woodpecker.

A good example of an ecosystem dependent on fire is the longleaf pine community. Longleaf pine forests once covered about 90 million acres in the Southeast, but today only about four million remain. In the absence of fire, longleaf pine and its associated plants and animals, some of which are rare and occur only in longleaf pine ecosystems, are replaced by other species.

Scientists and land managers are increasingly aware of the importance of fire for maintaining a healthy longleaf pine forest. "The Longleaf Alliance—a group of longleaf enthusiasts comprising land managers, landowners, researchers, and others—has made monumental strides since its inception in 1995 toward restoring longleaf pine ecosystems," Stowe said.

"Besides the ecological benefits of prescribed fire, it also has the added benefit of reducing fuel on the forest floor and lessening the chances of a catastrophic fire, which can threaten homes and people," Stowe said. "Because fire has been suppressed for so long in some places, you get dangerous buildups of fuel and increase the chances for a wildfire that can destroy property and lives. The wildfires we've seen across the United States recently are due in large part to past fire suppression and they underscore the need for prescribed fire."

By using a prescribed burn—when wind, temperature and humidity conditions are appropriate to remove some of the forest fuel like leaves, pine needles and twigs—fire managers can greatly reduce the chances of a catastrophic wildfire. After prescribed burns are completed, the homes and properties close to heritage preserves will be much less likely to be in the path of a wildfire, because the fuel is reduced or eliminated.