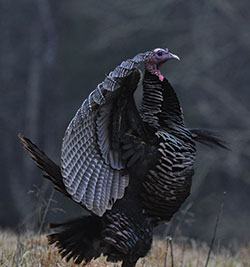 Like other birds of the family Phasianidae, eastern wild turkeys are equipped with long, thick legs, large toes for walking and scratching, and a relatively short bill. Wild turkeys are unmistakable in their appearance. Males have dark iridescent plumage, bare heads and necks with blue and pink streaks, fan-shaped tails tipped with chestnut, and black-barred flight feathers. Male turkeys (gobblers) also have spurs and a "beard," a tuft of thick, hair-like feathers that protrude out of the animal's breast. Female turkeys look much like their counterparts but lack the spurs, and most do not have a "beard." The eastern wild turkey is North America's largest gamebird. Adults weigh between 5.5-11 kilograms (12-25 pounds) and can reach a length of 91 cm (36 inches) for females to 122 cm (48 inches) for males. Wild turkeys differ from domestic turkeys in that they are less stocky and the head is more tinged with blue.

Like their name implies, eastern wild turkeys occur throughout the eastern United States. They inhabit mature deciduous forests and open woodlands as far north as New England. The species has also been introduced to California and other western states. Eastern wild turkeys are found throughout South Carolina, including the ACE Basin. They occur in a variety of habitat types, preferring mixed pine/hardwood stands interspersed with fields and/or wildlife openings (clearings maintained to attract wildlife).

The habitat choice of adult turkeys results from their dependence upon plant material, primarily acorns, for food and their need to avoid predators. Turkeys are opportunistic feeders with diet varying by season. Seeds, grain, acorns, and insects constitute a large portion of the diet, although fiddler crabs and frogs are important food items in coastal areas. Mast-producing hardwoods are prime turkey habitat, but a mixture of understory plants is also important for food and cover. Through fall and winter, wild turkeys are generally found in hardwood stands where mast such as acorns and dogwood berries are available as forage. Turkeys feed heavily in late winter to accumulate reserves for the spring breeding season. In spring, turkeys seek out new leaves of grasses and sedges, with acorns and other hard mast also comprising much of the diet.

Flocks of turkey are most commonly sighted in the ACE Basin during fall and winter months. The birds roost in trees at night and begin foraging at daylight. As spring approaches and daylight hours increase, the gobblers separate from the flock to set up mating territories. Courting begins in March and usually peaks in April, with completion of courting and mating by early July. During this time, the males consume little food and mainly devote time to gathering hens and mating. Turkeys are ground nesting birds. Hens that are mated set up nests that are usually placed at the foot of a tree or by a log. On barrier islands, the sides of grass-grown banks may be used for nesting. The nest is essentially a depression in the soil, lined with leaves and grass. The number of eggs varies from 8-15 with an incubation period of 28 days. Young turkeys (poults) are precocial; that is, they require little parental care after hatching. Poults are able to fly in 12-14 days and remain with the female for up to 6-8 months.

Young turkeys feed largely on insects early in life. A high protein diet is essential for their first few months of life. Vegetation, fruits, seeds, and mushrooms are also favored foods of young turkeys. Water is a daily requirement, necessitating that poults be located within 0.4 kilometers (0.25 mi) of a water source. At 12-14 days of age, the brood and hen begin roosting in small trees. Other broods may join in to form a flock that forages along edge habitats of fields, logging roads, and regenerated areas. These summer flocks remain together into fall; however, adult gobblers travel singly or in small groups. Turkeys forage on the ground for seeds, nuts, acorns, fruits, insects, and other small invertebrates. At night they roost in trees and, during the winter, congregate in flocks that number 40-50 individuals.

Wild turkeys are widely hunted for both food and sport. In South Carolina, the hunting season extends from March 15 or April 1, depending on location, to May 1 in all counties. In spring 1997, the harvest totaled 13,984 turkeys, a tremendous increase from the 132 individuals taken in 1970. Such statistics reflect successful re-stocking and management practices in the state.

Currently, the wild turkey is not an endangered species. However, the species was almost extinct throughout its range around 1900 due primarily to hunting and habitat loss. From 1951 to 1958, the South Carolina Department of Natural Resources carried out a live-trapping and transplanting program in an effort to replenish turkey populations in the piedmont and mountain portions of the state. In 1975, a program to restore turkey populations in the coastal plain was initiated. A number of restoration sites were selected based on location and habitat characteristics, and each was stocked with about 5 gobblers and 10 hens. Thanks to the establishment of such re-stocking programs and habitat improvement, turkeys are now common in most areas where they were once absent. Wild turkeys now occupy all 46 counties in South Carolina, and populations are healthy.