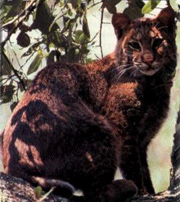 The bobcat is easily distinguished from similar species of felines by its characteristic short (bobbed) tail. Its fur ranges from grayish to reddish-brown with black spots and its tail is tipped with black above and white below. This species has dark ears with white tips, stands 40 to 55 cm (16-22 in) at the shoulder and measures 60-100 cm (24-40 in) long (not including the 8-18 cm (3-7 in) tail). Bobcats range in weight from 5-30 kilograms (10-70 lbs), with males being slightly heavier than females.

Bobcats are found throughout North America except in the central and lower Midwestern states. In South Carolina, bobcats typically inhabit areas of dense, thick brush such as bottomland forests in the coastal plain. They are found in many different habitats including swamps, mountainous regions, and forests.

Bobcats are polygamous; that is, they mate with more than one partner during the breeding season. They reach sexual maturity at 1 year of age and breed in late winter and early spring. After a 62-day gestation period, females give birth to two to four kittens whose eyes open in 10 days. By 4 weeks, kittens begin exploring their surroundings, and they are weaned by 7-8 weeks. Juveniles leave the den the following spring. Bobcats are opportunistic, feeding on a wide variety of prey depending on availability. Their diet includes mice, rats, squirrels, rabbits, birds, and occasionally white-tailed deer. They have been known to prey on deer during the fawning and hunting seasons, during which times they find young and wounded or crippled deer easy prey. Bobcats hunt primarily with their keen visual and auditory senses. Unable to outrun their prey, bobcats prefer to stalk and ambush unsuspecting creatures. They live to approximately 15 years in the wild.

Bobcats are a recreationally important species in South Carolina. They are hunted from Thanksgiving Day to May 1 with no bag limit. Bobcats are currently not endangered. Humans have historically trapped bobcats for their valuable pelts and caused subsequent population decline. Today, the bobcat population is rebounding due in part to both a decrease in hunting and the restocking of individuals. Bobcats are currently classified as protected game by the South Carolina Department of Natural Resources and may only be hunted during legally established seasons.