The historic heavy rainfall event of Oct. 1-5, 2015 produced record rainfall rates and totals in South Carolina. Finding information about that event is now easier due to a new online interactive journal from the S.C. Department of Natural Resources (DNR) State Climatology Office. The S.C. State Climate Office hopes the site will help everyone better understand the State's vulnerability to flood so that we can work together to be more aware and resilient. 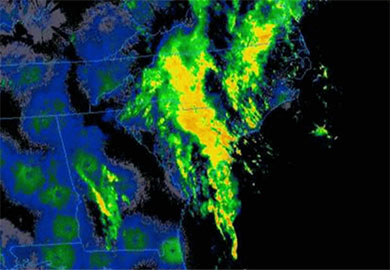 To see the online interactive rain and flooding journal, visit https://www.dnr.sc.gov/flood2015. This content is best viewed with Chrome or Firefox web browsers.

Click and zoom to find a chronological summary of the rain and flooding, a synoptic description of what caused the unprecedented rainfall, high res digital reflectivity loop maps, rainfall and hydrologic maps and records, a photo account, and information on DNR's Law Enforcement Division activities during the flooding. You can identify where the rainfall exceeded a 100-yr, 200-yr, 500-yr and even 1,000 year rain event.

By the Numbers.. Examples of Information Found in the Journal