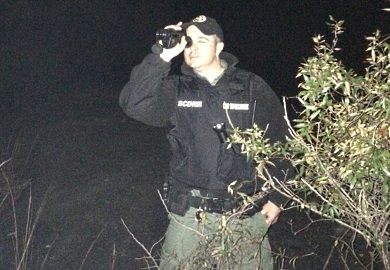 Several cold nights lying await in the wet woods paid off when officers apprehended people building fires in and near the shallow pools that are the critical habitat of the preserve's rarest and most imperiled species–the federally endangered pool sprite and black-spored quillwort. According to Johnny Stowe, S.C. Department of Natural Resources (DNR) Heritage Preserve manager, these plants, which grow in the vernal pools on "The Rock," are among the rarest plants in North America.

"They are specifically adapted to grow in these depressions and can live nowhere else," Stowe said. "There are only a handful of rock outcrops in the world that have these pools and no others in South Carolina. The pools fill with water periodically, which is when the plants grow, and then they dry up. Folks tend to build fires in them when they are dry, which destroys the seeds."

South Carolina DNR Sgt. Brady Branham said: "The officers in Lancaster and Fairfield counties are determined to protect this invaluable resource from abuse and misuse and will do whatever it takes to protect this unique natural area. Although these recent cases were made during one of our busiest times of the year, during waterfowl hunting season and when night-hunting for deer is going on, these dedicated officers made time to stake out and catch individuals engaged in these illegal activities.”

Other damage to these plants comes from people driving around the gate and onto the rock and through the pools. The Heritage Preserve Act specifies that public access on heritage preserves shall be foot-traffic only. Botanist April Punsalan of the U.S. Fish and Wildlife Service said that in Georgia, entire populations of these imperiled plants have been destroyed by vehicles driving through the pools. Vandals also spray paint graffiti on the preserve’s many rock outcrops. 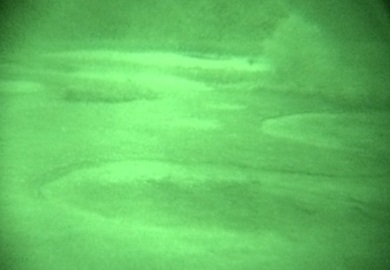 South Carolina DNR Lt. Shean Coates said, "People should be aware that DNR law enforcement officers will not tolerate abuse of any kind of these unique resources on this or any other public lands. They belong to our state's citizens, and the department takes very seriously its role as guardians of these special places."

Forty Acre Rock is one of only six National Natural Landmarks in South Carolina, a designation by the National Park Service that recognizes the nation’s most outstanding natural and geological features.

Forty Acre Rock was the state's first dedicated heritage preserve, and was protected in perpetuity by the Katawba Valley Land Trust, The Nature Conservancy, DNR and other conservation groups. The preserve was painstakingly pieced together by acquiring 14 parcels of land, beginning in 1981, with the most recent, the Rainbow Ranch tract, coming into state ownership a few months ago.