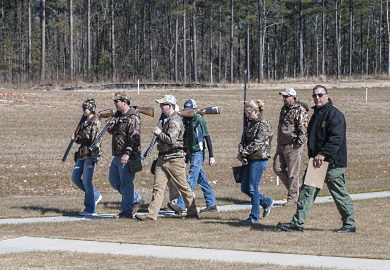 The matches got underway on Friday, Feb. 12 with the Youth Trap Open. The Youth Skeet Open followed on Saturday, Feb. 13. With one hundred shooters in each championship match from varsity and junior varsity school and club shooting teams from around the state, youth shotgunners competed under the careful supervision of S.C. Department of Natural Resources (DNR) law enforcement officers to ensure the safety of competitors and spectators.

After a full day of shooting, the scores were tallied and trophies awarded for the first, second and third place school teams and club teams. Individual high scoring shooters also received trophies for their accomplishments. Scholarships totaling $14,000 for the two days were provided by the Harry Hampton Memorial Wildlife Fund. 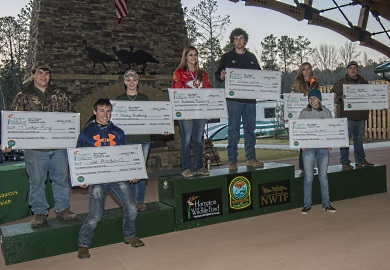 "The success of our scholastic clay target sports program is due to the dedication of coaches and parents who are willing to spend time with their kids," said Capt. Billy Downer, head of the DNR's Hunter Education program. "We believe the focus and discipline required to be successful in shooting sports spills over into the classroom and makes these youth better students."

To participate in either the Youth Trap Open or the Youth Skeet Open, shooters must qualify in an earlier 50-shot qualifier event.

The second annual Youth Sporting Clay Open championship event, scheduled for March 5, also will be held at the Palmetto Shooting Complex in Edgefield. For complete scoring information from both events or more information about these or other Hunter Education programs, visit the Scholastic Clay Target Sports website or contact the DNR's shooting sports coordinator, Officer Ryan Bass, at BassR@dnr.sc.gov.

Four $500 Hampton Wildlife Fund Scholarships, one each, were awarded by drawing to: