A group of conservationists, scientists, private landowners, nonprofit organizations and government agencies has published a five-year plan to reverse the rapid decline of shortleaf pine woodlands and forests. The Shortleaf Pine Restoration plan, recently released during the annual meeting of the Southern Group of State Foresters, is the result of two years of effort by the Shortleaf Pine Initiative and is the first strategy aimed at improving the shortleaf pine ecosystem across its entire range. 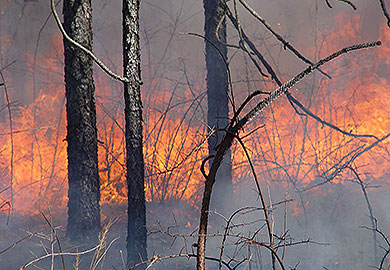 “This plan marks the first concrete steps in restoring these highly valuable shortleaf pine forestlands,” said Mike Black, director of the Shortleaf Pine Initiative. “Thanks to the work of our many partners, we now have a practical roadmap for restoration with scalable, achievable goals specifically tailored to the regional needs of the ecosystem.”

Shortleaf pine, because of its prime lumber qualities, was an important tree that helped build many of the early “heartpine” structures in the Eastern U.S., in both the countryside as well as towns and cities. But because of poor management practices throughout the nineteenth century and conversion to other forest types and land uses over the last 50 years, shortleaf pine woodlands and forests have dwindled from 70-80 million acres in 1896 to only about 6 million acres today. Open woodlands where shortleaf is a common tree, if burned frequently, can serve as important habitat for many rare species, and when managed properly, can produce very high-quality timber products; it is comparable to longleaf pine lumber.

Open stands of shortleaf, often mixed with other desirable species of pine and hardwoods, can provide prime turkey, quail and small game habitat if burned properly. Shortleaf grows well with, and is often mixed with, other fire-adapted trees. In South Carolina it is found from the highest ridges in the Upstate to longleaf pine flatwoods in between tidal creeks on the coast.

Sam Stokes Jr., a DNR wildlife biologist working in the Pee Dee-Catawba Region, says, “I grew up in Pickens hunting in the mountains and piedmont in mixed pine hardwood forests containing shortleaf pine, and now I manage wildlife in shortleaf pine woodlands on ridges in the Great Pee Dee river bottoms on Marsh Wildlife Management Area.”

Johnny Stowe, heritage preserve manager for the DNR, says that he is increasingly finding mature shortleaf in places he did not expect it. Recently, he found a large shortleaf in a longleaf pine savanna on Longleaf Pine Heritage Preserve and WMA in Lee County.

“Shortleaf in lower Lee County is generally found on ridges near the larger blackwater streams, such as the Black River,” said Stowe, “but I am seeing it farther away from streams more and more. Usually it is on slightly higher ground, and is found with fire-tolerant dogwoods and hickories, and with blackjack, post and Southern red oaks. Shortleaf is often found in special places. Many times these are really pretty woods that only need some careful restoration with the ecological imperative of the pineywoods, prescribed fire, to become prime wildlife habitat.”