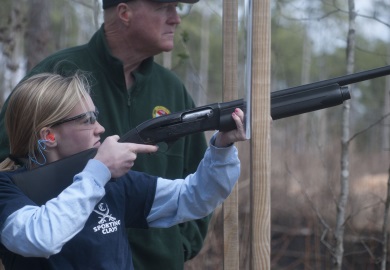 The big news, however, came after the shooting ended when the S.C. Department of Natural Resources (DNR), the Harry Hampton Memorial Wildlife Fund and other sponsors awarded $33,000 in scholarships to graduating shooters on their way to college.

Nearly two thousand people including shooters, coaches and families gathered March 5 in the Palmetto Shooting Complex pavilion and at team tents set up on the grounds where picnics and folding chairs created a family atmosphere. Food and shooting supply vendors also were on hand as were DNR officers who volunteered as trappers while also keeping event participants and spectators safe.

"This event is about the kids and about promoting shooting sports, but the success comes from our partnerships," said Capt. Billy Downer of the DNR's Law Enforcement Division. "We could not have this tournament without our partnership with the National Wild Turkey Federation and our sponsors who donate the scholarships. We have great partners in the coaches and parents who encourage the youth to participate in our event. But the partnership I am most proud of is the partnership we have fostered among parents and their children. Seeing families out here supporting these young people is the greatest reward, and I believe it will pay off for these kids in the future as they become mentors for another generation."

The top three teams in each division were awarded trophies as well as the individual in each division who had the highest overall score. High overall shooters were presented with iPads thanks to donations from members of the DNR Law Enforcement Advisory Committee. While some scholarships were awarded based on scores, most were chosen during a random drawing from graduating senior shooters.