Young bull elk in Upstate S.C. should not be approached or fedNovember 7, 2016

A young bull elk is still roaming around Upstate South Carolina, but wildlife biologists are warning residents and visitors that it should not be approached or fed. 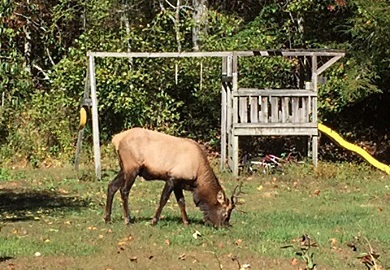 A young bull elk grazes in a yard near Sunset in northern Pickens County. The elk, one of a herd of about 150 in and around the Great Smoky Mountains National Park in North Carolina, was first seen in South Carolina Oct. 21. Biologists expect the elk to eventually return to the North Carolina herd.

“This elk is a wild animal and not domesticated,” said Tammy Wactor, wildlife biologist with the S.C. Department of Natural Resources (SCDNR) based in Clemson. “It has become accustomed to people, so it will allow people to approach it, but it is unpredictable, and this behavior can create dangerous situations. We are asking the public to respect the elk’s presence by keeping their distance.”

The elk was sighted Nov. 7 near the Pickens County town of Liberty. It was first seen in northern Pickens County, in the mountains, on Oct. 21. Social media in the past two weeks have featured numerous photos of the elk being fed and petted.

“We are hoping the elk will turn north and return to the mountains where there is less traffic and less urbanization,” Wactor said. “It would be nice if it could return to its herd in North Carolina. When people approach the elk or try to feed it, it can affect the elk’s behavior and travel patterns and it also has the potential to create public safety issues.”

Legislation that was passed five years ago by the S.C. General Assembly protects elk in the Palmetto State. The legislation was promoted by the Rocky Mountain Elk Foundation, in anticipation of elk migrating into South Carolina.

Wactor said the young bull elk was likely pushed out of its territory in Heywood County, North Carolina, by bigger bulls. Once the young elk realizes there are no female elk in South Carolina, it is anticipated that it will likely return to North Carolina.