With the 2016 deer season soon opening in all counties, South Carolina's deer population is healthy and the season outlook is good, according to the state's top deer biologist. 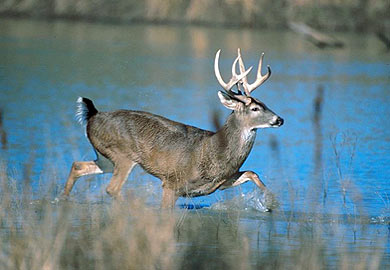 South Carolina's deer population is healthy and the season outlook is good, according to the S.C. Department of Natural Resources. (SCDNR photo)

Although the deer harvest has been on a downward trend the last few years indicating that population levels have moderated, hunter success and deer harvest rates remain good, according to Charles Ruth, S.C. Department of Natural Resources (SCDNR) Deer and Wild Turkey program coordinator.

Top counties for harvest in 2015 included Anderson, Hampton, Spartanburg, Bamberg and Orangeburg with each of these counties exhibiting harvest rates in excess of 13 deer per square mile. Very few areas in the United States consistently yield comparable harvest figures. Top counties for quality deer in 2015 included Aiken, and Orangeburg in the coastal plain and Anderson, and Oconee counties in the piedmont. These results come as no surprise as most of these counties have historically produced good numbers of record entries.

As it relates specifically to the decrease in harvest during the 2015 deer season, it should be noted that hunting conditions in South Carolina were poor during Fall 2015. This began the first week in October with a 1,000-year rainfall and flooding event spawned by hurricane Joaquin in the Atlantic Ocean. The magnitude of this event forced a temporary season closure for all game species in parts of 15 coastal counties. Although these closures only lasted five to 10 days, the aftermath of the flooding in these areas and throughout the state created access and other problems for deer hunters. Additionally, hunting was negatively impacted by ongoing rainfall and unseasonably warm temperatures for the remainder of the deer season.

Find out more about the 2015 deer harvest and 2016 antler records at the South Carolina Department of Natural Resources website: https://www.dnr.sc.gov/wildlife/deer/index.html.

Ruth said, "Provided we experience normal weather and seasonal temperatures, the outlook for the 2016 deer season is very good. This is based on the simple fact that the decrease in harvest in 2015 was largely a result of poor hunting conditions and not fewer deer. That being the case there was likely carry over of deer that would have otherwise been harvested if conditions would have been better last year. This is particularly the case with respect to antlered bucks because residual bucks from last year will be a year older and likely have better body weights and antler development."

Hunters should not be overly concerned if the deer population is down compared to several years ago when the population reached its peak. Most hunters, to their credit, have recognized the fact that having fewer deer leads to better quality deer. Results of SCDNR's antler records program indicate that this may indeed be the case as the last five years have seen more than 1,000 bucks successfully entered into the state records program.