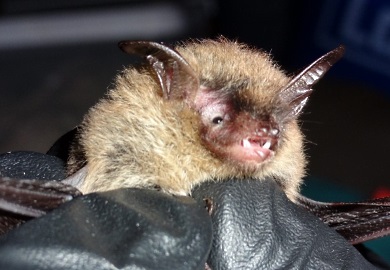 Two northern long-eared bats have been found on South Carolina’s Coastal Plain region at Palmetto Bluff in Bluffton (Beaufort County). Historically this federally listed species was known in South Carolina to exist only in the Upstate, so the discovery of these bats 200 miles south of their known range this past November came as a great surprise.

Mary Socci, associate director of the Palmetto Bluff Conservancy, a not-for-profit organization dedicated to the conservation of the natural and cultural resources of Palmetto Bluff, shared the exciting news. She told the S.C. Department of Natural Resources (SCDNR) that, while conducting research on the northern yellow bat, contractor Jason Robinson captured two northern long-eared bats: one adult female and one subadult male during early and mid-November, respectively. Because this species was not expected on the coast, hair and fecal samples were taken before release, and identification was confirmed genetically from a lab at Northern Arizona University.

Before populations of northern long-eared bats began plummeting in recent years largely due to White-nose Syndrome (WNS, a disease that’s killed over 6 million bats of seven different species in North America thus far), these bats were usually found in mountain forests. In 2016, some northern long-eared bats were found to live year round in the northern Coastal Plain of North Carolina. But finding individuals in one of the southernmost coastal counties of South Carolina is unprecedented. Northern long-eared bats in South Carolina were not thought to exist outside the Upstate, and potentially only migrate to North Carolina, but now it seems possible they could either have a resident population on the coast or be exhibiting unexpected migration patterns.

More research is needed to understand what this could mean for northern long-eared bats in the Southeast. However, this could be positive news in relation to WNS. The fungus that causes WNS attacks bats while they’re hibernating, so if populations of this species are active on South Carolina’s warm, semi-tropical coast during winter, it could potentially reduce their contact and mortality from this devastating disease.

SCDNR reminds and thanks the public for not disturbing hibernating bats this winter. Disturbance can cause mortality, as well as increase the spread of WNS since the tiny spores are easily transported by humans (but do not affect humans). All caves and mines on National Forest lands continue to be closed year-round until 2019. Please help prevent bat deaths by respecting these closures.