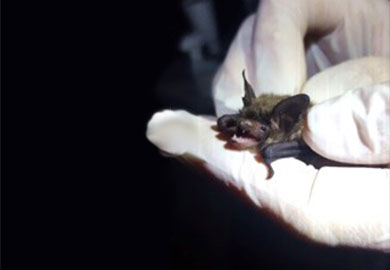 A Northern long-eared bat juvenile is examined during a bat survey. Evidence of a breeding population of the federally threatened bat species has been found on South Carolina’s Coastal Plain. (Photo by Brent Henry).

Five Northern long-eared bats have been captured in two new counties on the South Carolina’s Coastal Plain: Charleston and Berkeley counties. In addition, evidence of a breeding population has been found. Historically, this federally threatened species was known in South Carolina to exist only in the Upstate, but were discovered in fall 2016 on the Coastal Plain in Beaufort County.

Dottie Brown, senior ecologist at the consulting firm Ecological Solutions Inc., reported to the South Carolina Department of Natural Resources (SCDNR) the capture of five Northern long-eared bats as part of a bat research project being conducted in Francis Marion National Forest: two juveniles (one female, one male) and three adults (one female, two males). They were captured mid-June through early July near a stream corridor. "With the presence of a lactating female and two juveniles, there’s no doubt they are reproducing here in the summer," said Brown. "These may be the first documented active summer roosts for Northern long-eared bats on any coastal plain."

Brown and her team fitted the bats with radio transmitters, and tracked them to a daytime roost each day. Although the main maternity roosts have dispersed at this point in the season, multiple bats were documented leaving juvenile roosts during emergence surveys. Northern long-eared bats used to be commonly found in mature forests and large tree cavities before their populations declined. However, opportunistic selection of roost-sites within a wide range of tree size and species has also been seen.

"We were excited to hear Northern long-eared bats had been found on our coast last fall, but weren’t sure if they were migrating or part of a potential year-round population," said Jennifer Kindel, SCDNR wildlife biologist.

Before populations of Northern long-eared bats began plummeting in recent years largely due to White-nose Syndrome (WNS; a disease that’s killed over 6 million bats of seven different species in North America thus far), Northern long-eared bats were usually found in mountain forests. More research is needed to understand what this could mean for the species, but it could be positive news in relation to WNS. The fungus that causes WNS attacks bats while they’re hibernating, so if populations of this species are active on South Carolina's warm, semi-tropical coast during winter, it could potentially reduce their contact and mortality from this devastating disease.