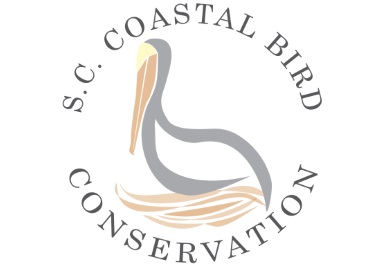 Click on the logo to learn more about the S.C. Coastal Bird Conservation Program and its plans to restore, protect and enhance coastal bird habitat in South Carolina.

Early in 2018, the federal government announced a program under the U.S. Water Resources Development Act (WRDA) that would fund ten projects supporting beneficial uses of dredged material. The S.C. Department of Natural Resources (SCDNR) submitted a proposal for this pilot program to cover 100% of the construction costs of restoring the Crab Bank Seabird Sanctuary with beneficial dredged material from the Post-45 Charleston Harbor Deepening Project and was notified just prior to the Christmas break that the agency’s proposal has been chosen as one of ten successful pilot projects under the program.

“The federal funds from this award will allow SCDNR to work with Audubon South Carolina, the Coastal Conservation League, and Coastal Expeditions to focus on what we thought was out of reach – working on natural stabilization measures, such as living shorelines, that will increase the lifespan of the island, as well as increase diversity of habitat for shorebirds,” said Felicia Sanders, seabird and shorebird biologist for SCDNR. The award of the WRDA funds means that 100% of the construction costs for Crab Bank could be covered by the federal government. However, many unknowns remain as to when those funds will be made available to the Charleston District of the U.S. Army Corps of Engineers and if they will be here in time for when the dredging occurs in the areas next to Crab Bank.

“Either way, excitement for coastal bird conservation in South Carolina continues to build, and as each day passes, it appears that Crab Bank restoration is becoming more of a reality and less of a dream,” said SCDNR Office of Environmental Programs Director Lorianne Riggin. “If the WRDA funds arrive in time and cover the entire costs of construction, stabilization options for Crab Bank such as building oyster reefs that were originally explored but left out of the original cost-share option due to increased, seemingly unobtainable costs, could be entertained again.”

Because this is a pilot program, there are still many unknown aspects of how this process will work, but SCDNR staff and the Coastal Bird Conservation’s supporting organizations are “very excited about the award’s potential for Crab Bank,” added Riggin. The successful projects funded through the WRDA pilot program needed to include goals such as: providing storm damage reduction; promoting public safety; protecting, restoring and creating aquatic ecosystems; promoting recreation; enhancing shorelines; civic improvement; and, other innovative uses and dredge material placement alternatives that produce public economic or environmental benefits. The Crab Bank project meets all of those objectives.

The SCDNR’s WRDA Crab Bank proposal was submitted in March 2018. In the interim, a highly successful fundraising campaign spearheaded by local and state conservation organizations that support the goals of the South Carolina Coastal Bird Conservation Program was undertaken to raise the estimated amount of cost-share funds needed to ensure restoration of Crab Bank. Funds raised from that effort will go towards matching the $700,000 National Fish and Wildlife Foundation Coastal Resiliency Grant, announced in November. The grant will help stabilize Crab Bank, fund continued research, protection and enhancement of natural coastal habitats to address shrinking populations of coastal birds, and support programs to educate the public about coastal birds. To date, approximately $1.2 million has been raised toward this effort.

Funds raised beyond those needed to restore and stabilize Crab Bank provided by corporate and other donations to the S.C. Coastal Bird Conservation Program could be put toward long-range goals of protecting nesting and migrating birds along the entire South Carolina Coast by increasing nesting success, building community awareness and adding to biologist’s knowledge about nesting behavior and reproductive success. Some specific examples of such projects include: