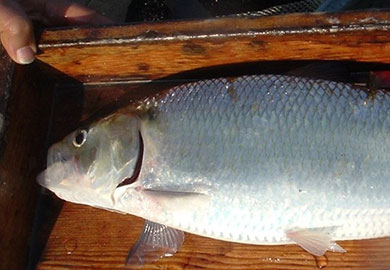 While not for the faint of heart, cold February-March temperatures can bring on some of the hottest fishing around, especially if you are in pursuit of American Shad. South Carolina’s Santee River System (aka - The Santee Basin) supports some of the largest populations of migratory fish on the East Coast, including the American Shad. Keeping that fishery alive means keeping the Santee Basin healthy and restoring access to fish spawning areas; and that’s what the South Carolina Department of Natural Resources (SCDNR) and its partners want to accomplish with the recently updated Santee Basin Diadromous Fish Plan.

Originating in the Blue Ridge Mountains of North Carolina, the Santee Basin is the second largest watershed on the East Coast, second only to the Chesapeake Bay watershed, and supports important commercial and recreational fisheries. For the migratory fish of the Santee Basin, an imperative part of their life cycle is being able to access both marine and freshwater habitats. For species of fish such as the Atlantic Sturgeon (federally endangered), Shortnose Sturgeon (federally endangered), American Shad, Hickory Shad, and Blueback Herring, which spend most of their adult lives in marine or estuarine environments, migration to freshwater is necessary for spawning. Other species, such as the American Eel, spend most of their adult lives in freshwater and migrate to marine environments to spawn. While gains have been made in restoring depleted populations of some of these species, restoring the fishery to historic levels means continuing to overcome habitat loss and degradation and impediments to spawning migrations and spawning habitat.

To improve the habitat of migratory fish and restore access to former spawning and maturation sites, the National Marine Fisheries Service (NMFS), SCDNR, and the U.S. Fish and Wildlife Service (USFWS), developed the Santee-Cooper Basin Diadromous (migratory) Fish Passage Restoration Plan in 2001. The development of this plan led to a number of significant accomplishments including construction of a fish ladder at the Columbia Diversion Dam to provide passage for American Shad and Blueback Herring to access about 24 miles of spawning habitat on the Broad River. The plan also established scientifically-based flow criteria for restoration of certain fish species at five hydroelectric projects. Even more important was the establishment of the Santee River Basin Accord that created programs to conduct American Shad fry stocking and monitor spawning migration patterns of American Shad, Shortnose Sturgeon, and American Eel. As a result of the Santee River Basin Accord, more than 26 million American Shad Fry were stocked into the Broad and Wateree Rivers from 2008-2017.

To build on the accomplishments of the 2001 plan, NMFS, SCDNR, USFWS, and North Carolina Wildlife Resources Commission (NCWRC) have recently updated the plan. The updated plan will build on the accomplishments of the past by further improving scientifically-based flow criteria at hydroelectric projects, improving water quality throughout the Santee Basin, protecting fish habitat, providing upstream and downstream fish passage, and conducting further population enhancement and monitoring projects. Specifically, the updated plan promotes the importance of streamside buffer zones for the improvement of water quality, identifies studies necessary for understanding the life history and movement patterns of Atlantic Sturgeon, Shortnose Sturgeon, and American Shad, and identifies funding sources that can be used to protect land areas along streams within the Basin.

The NMFS, SCDNR, NCWRC and USFWS have been working in partnership with the utilities operating hydroelectric facilities in the Santee Basin, such as Duke Energy, Lockhart Power, Santee Cooper, and SCE&G, as well as other federal, state and local agencies with interests in the migratory fishes of the Santee Basin to accomplish these objectives.