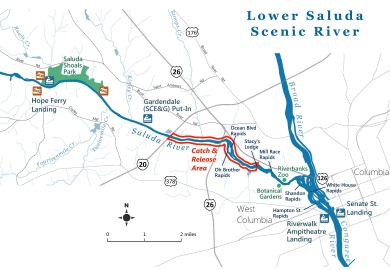 A new law passed by the S.C. General Assembly in May establishes a catch-and-release-only zone for brown and rainbow trout on the lower Saluda River near Columbia.

Changes to state law regarding trout fishing will soon be in place to protect spawning trout in the Lower Saluda River.

Anglers in the Midlands of South Carolina have long enjoyed a unique “put-and-take” trout fishery in the lower Saluda river below the Lake Murray Dam, thanks to the fact that water released from the bottom of the dam is cold enough to support, at least temporarily, hatchery-reared rainbow and brown trout. These fish are grown at the South Carolina Department of Natural Resources cold-water fish hatchery in Oconee County. From the 1960s, until the mid-2000s, anglers enjoyed catching rainbow and brown trout stocked – sometimes by helicopter – during the fall and winter and into the spring. During Columbia’s extremely hot summer and early fall, those stocked trout that weren’t caught by anglers would typically die due to decreased oxygen levels in the river.

In the late 2000s, after the SCDNR and other conservation groups negotiated with dam operator SCE&G for a more regular minimum flow of water through the dam, local trout anglers and SCDNR fisheries biologists began to notice something interesting. With the new water flows and new equipment designed to increase oxygen levels providing a more consistent supply of cool, oxygenated water downstream, some stocked trout were beginning to survive and grow to trophy size. During 2014, it was also discovered that these “holdover” fish had begun reproducing, with young-of-the-year surviving in a section of the river between Saluda Shoals Park and Riverbanks Zoo.

The SCDNR held a series of public meetings in February 2018 to discuss the possibility of creating a “catch-and-release-only” zone to facilitate the reproduction now occurring in the river. Feedback from anglers and other stakeholders was positive, and a bill, sponsored by Lexington Senator Katrina Shealy was drafted for consideration by the South Carolina General Assembly during the session that recently ended.

"The establishment of the catch and release zone between I-20 and Stacey's ledge on the Lower Saluda will provide an opportunity for anglers to experience a very good trout fishery in a very unique location,” said SCDNR Fisheries Chief Ross Self. “This area should have very good access and is the best area for anglers to wade and fish of any location along Lower Saluda."

As a result, effective July 1, 2018, ”the lower reach of the Saluda River, from the eastbound I-20 bridge downstream to Stacey's Ledge, is year round catch and release fishing only for all species of coldwater trout,” and it will be “unlawful to take and retain trout at any time” in this section of the river. The bill also mandates that “the Department of Natural Resources shall make a study of the lower Saluda River trout fishery and make recommendations on any needed modifications to the fishery by November 1, 2023.”

The full text of the bill can be read at the “SCStatehouseOnline” website.