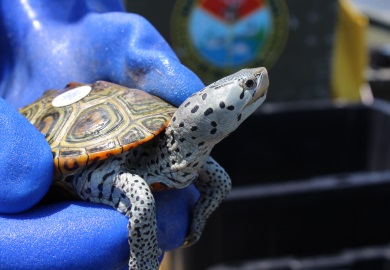 An SCDNR researcher on the South Carolina coast carefully holds a diamondback terrapin. Hundreds of species that are "wildife of conservation concern" in the Palmetto State could benefit from passage of the "Recovering America's Wildlife Act," currently under consideration by the U.S. Congress. [SCDNR photo by Erin Weeks]

The South Carolina Natural Resources Board, the policy-making body for the South Carolina Department of Natural Resources (SCDNR), is one of the latest of hundreds of agencies and organizations nationwide to throw its support behind a piece of federal legislation designed to provide much-needed funding for wildlife of conservation concern at the state level. If passed, the bill would provide South Carolina with millions of dollars in new funding to support existing and new initiatives for wildlife conservation, research, management, habitat protection and education. The Board unanimously passed a resolution affirming their and the agency’s support for the federal legislative initiative at their March 23, 2018 meeting.

House Resolution 4647, known as the “Recovering America's Wildlife Act,” (RAWA) was introduced in 2017 by Nebraska Rep. Jeff Fortenberry and Michigan Rep. Debbie Dingell and is co-sponsored by a growing list of Republican and Democratic lawmakers that includes South Carolina Rep. Jeff Duncan, a member of the Congressional Sportsmen’s Caucus. That broad bipartisan support has sparked optimism among groups such as the Association of Fish and Wildlife Agencies, the National Wildlife Federation, and many others that, with public support for the measure also growing, the bill could be on a fast track to becoming law. Since its introduction last December, RAWA has been making its way through the House subcommittee review process, steadily gaining support from co-sponsors along the way. Organizations tracking the legislation believe a companion bill could be introduced in the U.S. Senate soon, and that, if citizens demonstrate their support to lawmakers in large enough numbers, both bills could pass their respective chambers before the end of 2018.

The RAWA initiative is the result of a partnership - consisting of members representing the outdoor recreation, retail and manufacturing sector, the energy and automotive industries, private landowners, educational institutions, conservation organizations, sportsmen’s groups and state and federal fish and wildlife agencies - created by the Blue Ribbon Panel on Sustaining America’s Diverse Fish & Wildlife Resources. Learn more about the history of the RAWA initiative and find out how you can take action to support the bill at the Alliance for America’s Fish and Wildlife website at the link below.