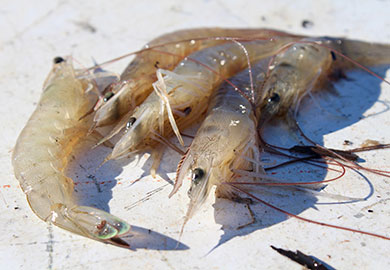 SCDNR biologists hauled in these shrimp during a 2018 trawl survey, conducted monthly in Charleston Harbor to track the health, size, and numbers of shrimp in state waters. [Photo: E. Weeks/SCDNR]

At 8 a.m. on Tuesday, June 19, 2018, commercial shrimp trawling will open in all legal South Carolina waters. Georgia state waters will open at the same time.

The season opening comes about a month later than average, after a cold winter killed off the majority of the overwintering white shrimp that normally make up the spring crop.

"The smaller number of white shrimp we have seen recently have been spawning, some more than once," said Mel Bell, director of SCDNR's Office of Fisheries Management. "Hopefully we will have a good run of brown shrimp to get us into the summer, and an abundant crop of white shrimp this fall."

In January 2018, the Southeast experienced a stretch of abnormally low temperatures. Temperatures dropped below 48 degrees Fahrenheit in Charleston Harbor, an important threshold below which shrimp start to die. For three weeks, water temperatures remained below 48 degrees, killing most of the shrimp spending the winter in South Carolina waters.

SCDNR officials immediately closed state waters to trawling and requested that federal counterparts at NOAA Fisheries do the same in federal waters (>3 miles offshore) in order to protect the surviving shrimp.

Since then, SCDNR biologists have been closely monitoring the situation with shrimp trawls several times a month – and unsurprisingly, they've been reporting below-average numbers of white shrimp. In addition to the low numbers, the cold water temperatures may have put shrimp development behind schedule.

"Cold January temperatures greatly reduced the spring crop, but our monitoring efforts show that brown shrimp are developing, and the juvenile white shrimp that will make up the fall crop are already beginning to grow in the tidal creeks that serve as their nursery grounds," said SCDNR assistant marine scientist Dr. Michael Kendrick.

South Carolina's commercial shrimp calendar has three peak periods. In the spring, shrimpers typically capitalize on the influx of roe white shrimp, large, early-season shrimp that generally fetch higher prices and generate the most value for fishing effort. These were the shrimp affected by the low temperatures, which were largely absent from our waters this spring. The summer months are defined by a peak in brown shrimp, which are similar to white shrimp in size and taste. Brown shrimp, fortunately, were not likely impacted by the cold January, although their average size remained a bit smaller than average as of mid-June. In the fall and into winter, shrimpers bring in a second crop of white shrimp – this time the offspring of the spring roe shrimp.

Because the size of the fall crop depends on successful spawning by the spring shrimp, SCDNR officials do not open the spring trawling season until they have evidence that the majority of white shrimp have spawned. Federal waters adjacent to South Carolina waters reopened to shrimp trawling on Wednesday, June 13, 2018; state waters will now follow on June 19.

One bright spot this season is that shrimp are prolific spawners — a single female can produce millions of eggs. A cold winter, therefore, does not doom the success of the fall white shrimp crop. But harvest may be slow until brown shrimp return in larger numbers to coastal waters.

"The industry will need to see what things look like this week and determine if they want to harvest or not," Bell said. "The boats need to be able to land enough product with enough value to make trips profitable." 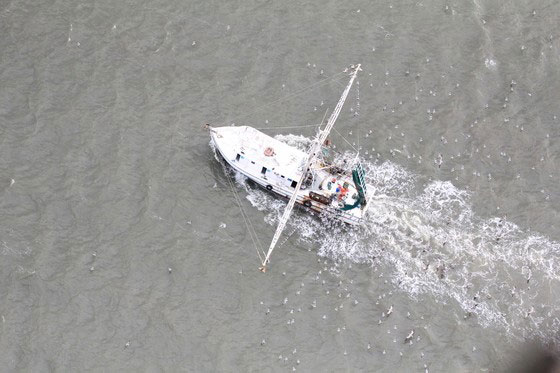