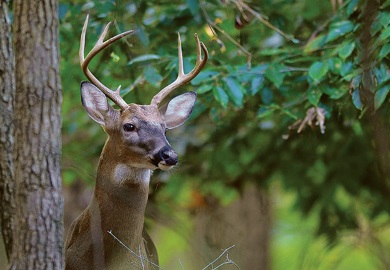 Results of the 2017 Deer Hunter Survey conducted by SCDNR indicate that the statewide harvest of deer increased about 7 percent last season and was comprised of an estimated 102,261 bucks and 83,025 does which made up a total harvest of 185,286 deer.

This increase in harvest is likely due to some level of "carry-over" of deer from 2015 and 2016. The 1,000-year flood spawned by hurricane Joaquin in 2015 and hurricane Matthew in 2016 each resulted in temporary season closures in some coastal counties and general access problems or decreased opportunity for hunters across much of the state. Also, each of these years saw unseasonably warm fall temperatures and there was what many called a record acorn crop in 2016. This resulted in back to back decreases in harvest. That being the case, there were likely deer that would have otherwise been harvested during those years that were carried-over to 2017.

The fall of 2017 was the first season of the "all deer" tagging system and statewide limit on antlered deer. Interestingly, the 7 percent increase in harvest was primarily a result of an increase in doe harvest (12.5%) rather than an increase in the harvest of bucks (2.5%). Increases in harvest are normally the result of increases in the buck harvest or a more equal increase in buck and doe harvest. This disproportionate harvest may be indicative of the new buck limit having the desired effect of decreasing pressure on bucks. It will likely take a few years for this to become clearer.

Top counties for harvest in 2017 included Bamberg, Hampton, and Calhoun in the coastal plain and Anderson and Spartanburg in the piedmont with each of these counties exhibiting harvest rates in excess of 12 deer per square mile, which should be considered extraordinary. Although the harvest has generally declined in recent years, South Carolina still ranks near the top among southeastern states in harvest per unit area.

All areas of South Carolina have long and liberal firearms seasons and the majority of deer (148,229) were taken with centerfire rifles in 2017. Shotguns (15,749 deer) and bows (13,155 deer) also contributed significantly to the overall deer harvest, whereas muzzleloaders, crossbows and handguns combined (8,153 deer) produced less than 5 percent of the total statewide harvest.

Although the annual Deer Hunter Survey focuses on deer hunting activities, there are questions on the survey related to the harvest of wild hogs and coyotes in the State. Results of this year’s survey indicate that approximately 22,441 coyotes were taken incidental to deer hunting. This figure represents a 27 percent decrease from 2016 continuing what seems to be a moderating trend in coyote numbers in recent years. On the other hand, approximately 37,858 wild hogs were killed statewide representing a 33 percent increase from 2016 likely related to increased reproduction and survival of pigs following the major flooding seen the previous two years.

Other survey statistics indicate that approximately 131,371 South Carolina residents and 14,673 nonresidents deer hunted in the state in 2017. Deer hunters reported an overall success rate of 69 percent, which is outstanding. Overall hunting effort was estimated at over 2 million days. The number of days devoted to deer hunting in South Carolina is very significant and points not only to the availability and popularity of deer as a game species, but to the obvious economic benefits related to this important natural resource. About $200 million in direct retail sales is related to deer hunting in South Carolina annually.