For those lucky enough to witness it, the sight of hundreds of feeding or flying American oystercatchers is one they won’t soon forget. In South Carolina, there’s one area you’re most likely to encounter this winter spectacle – and the 50-mile sweep of coast has recently being recognized as an internationally significant site for shorebirds such as the oystercatcher. 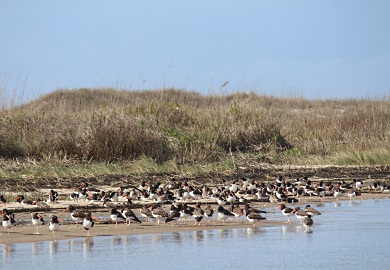 The bright orange bill of the American oystercatcher is a striking contrast to the gray-blue coastline in winter. (Photo: Erin Weeks/SCDNR)

The Western Hemisphere Shorebird Reserve Network (WHSRN) identifies protected land that provides essential habitat for shorebirds. The system currently includes 101 sites across 15 countries, spanning from Alaska to Tierra del Fuego at the southern tip of South America. Because many shorebird species migrate incredible distances across the globe each year between wintering and nesting grounds, an international approach to conservation is critical to their survival.

In 1995, Cape Romain National Wildlife Refuge in Charleston County was designated a WHSRN site due to its significance for the American oystercatcher: in the winter, approximately 1 in 10 of the country’s Atlantic & Gulf coast oystercatchers can be found in Cape Romain.

Now that site is expanding to include neighboring properties also home to remarkable numbers of shorebirds, reaching a total of 119,440 acres. Scientific survey data confirm that the Cape Romain-Santee Delta Region site supports over 100,000 migratory shorebirds annually, including 15% of the U.S. East and Gulf coast population of American oystercatchers and 11% of the short-billed dowitchers. It’s also likely that over 10% of the rufa red knot and semipalmated plover populations occur at the site, but comprehensive surveys are lacking.

“This site is important for shorebirds because of the long stretch of undeveloped coast line and diversity of habitats, from sandy front ocean beaches to managed wetlands,” said South Carolina Department of Natural Resources (SCDNR) biologist Felicia Sanders. “The designation also recognizes partnership among federal, state and private land managers and an awareness and pride in the surrounding communities.” 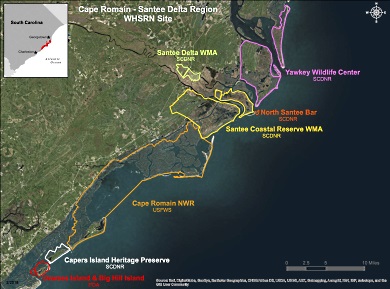 Learn More About the Land

Read on for information about the islands included in the designation.

The Yawkey Wildlife Center consists of North, South and Cat Islands: 24,000 acres in total of salt marshes, managed wetlands, wildlife openings, ocean beaches, longleaf pine uplands and maritime forests. The beaches of North Island, South Island and Sand Island are home to thousands of migratory shorebirds and nesting shorebirds such as the American oystercatcher, Wilson’s plover, and willet. In addition, 12 brackish, managed wetlands are located on South and Cat Islands. At peak spring migration, from March to the end of May, there may be 20-40,000 shorebirds foraging in these managed wetlands when water levels are drawn down.

The Santee-Delta WMA consists of 1,721 acres, of which 1,135 acres are managed wetlands (impoundments). Each impoundment is managed as a traditional moist soil method targeting the production of panic grasses and smart weeds.

Santee Coastal Reserve consists of 24,000 acres characterized as a waterfowl management area. Managed wetlands comprise 12,000 acres of the Reserve, and these are divided into 3 units: the Cape, with 9 impoundments; Murphy Island, with 4 impoundments; and Cedar Island, with 3 impoundments. The impoundments are former rice fields managed for the benefit of breeding, migratory, and wintering waterfowl, shorebirds, and wading birds. The front beaches of Murphy and Cedar Islands have nesting and migratory shorebirds.

Cape Romain extends 22 miles along the South Carolina coast. The 66,000 acres are primarily composed of estuarine emergent wetlands dominated by smooth cordgrass. Barrier islands in the refuge are: Cape Island, Lighthouse Island, Raccoon Key, and Bulls Island- each of these contain sandy shores and dune systems, intertidal mud and sand flats. Managed impoundments are found on Bulls Island; these range from fresh to brackish to salt water. Cape Romain NWR also has tidal creeks and a designated Class 1 Wilderness Area. Cape Romain NWR has large flocks of wintering shorebirds and 25% of the state’s nesting Wilson’s plovers and 42% of the state’s nesting American oystercatchers.

Capers Island is an undeveloped barrier approximately three miles in length and one mile in width. It encompasses 850 acres of maritime uplands, 214 acres of front beach, 1090 acres of salt marsh and over 100 acres of brackish water impoundments. The front beach has large flocks of migratory shorebirds and nesting Wilson’s plovers and American oystercatchers.

Dewees Island encompasses approximately 1,200 acres which consists of 2 brackish water impoundments total of 250 acres, 110 acres of beachfront, 670 acres of marsh and 540 acres of upland maritime forest. The island has only 150 home sites, no paved roads, and very strict building codes that demand a small footprint and very little clearing of natural vegetation.

Big Hill Island consists of 175 acres of marsh bordered along the Atlantic Intracoastal Waterway by a shell rake managed by Dewees Island. It supports nesting American oystercatchers and hundreds of wintering shorebirds.