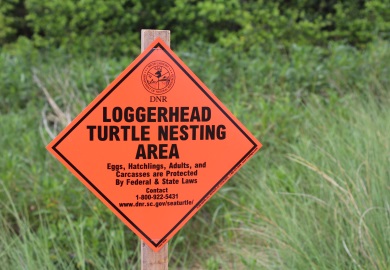 Like many spring phenomena this year, sea turtle nesting season in South Carolina was slightly behind schedule. The season’s official May 1 start date came and went with no sign of nesting turtles, likely due to cooler-than-normal water temperatures resulting from an abnormally cold winter.

But now the South Carolina Department of Natural Resources (SCDNR) is pleased to announce the season has finally begun – on May 8, 2018, a female loggerhead laid the first nest of the season on Daufuskie Island in Beaufort County. This marks the first time in several years that South Carolina’s inaugural nest has been laid in the southern part of the state, and for a beach that averages fewer than 100 nests each year, it’s a happy distinction.

“We are so excited to have the first turtle nest of the season on Daufuskie Island,” said Tammy Helmuth of the island's volunteer group. “[It was a] textbook nest; high and dry, tracks were perfect, and eggs were exactly where we thought they were.”

After following the telltale sea turtle tracks up the beach, Helmuth located the nest’s egg chamber with three gentle probes of the sand, extracted one egg for ongoing genetic research, and cordoned the nest off with tape and a sign. It’s a process that thousands of SCDNR-trained and permitted volunteers and staff will repeat this summer on every South Carolina beach as they count, monitor, and protect sea turtle nests.

“Given the number of loggerhead sea turtle sightings in the water reported to us this spring, we’re encouraged that it will be another successful nesting year, likely surpassing nest counts observed last year,” said biologist Michelle Pate, who coordinates SCDNR’s sea turtle program.

South Carolina’s sea turtle nest numbers have been gradually rising over the past decade, mirroring similar trends in neighboring states. Four of the past five years have seen the highest nest numbers since record keeping in South Carolina began. In 2017, volunteers and staff documented 5,251 nests, with a record-breaking 18 laid by green sea turtles.

Sea turtle clutches average 120 eggs and hatch after approximately 60 days. Nesting females may remain in South Carolina waters and continue to nest every two weeks, laying up to six nests per season. Throughout this stressful time, the turtles also abstain from eating. Because nesting exacts a high energy toll on the large reptiles, female sea turtles do not come ashore to lay eggs every year. This cyclical nesting pattern results in fewer sea turtle nests in some years than in others. In 2014, for instance, sea turtles laid just 2,097 nests along the South Carolina coast, following 5,194 nests in 2013.

South Carolina beachgoers can help the state’s sea turtles by keeping beaches clean, turning beachfront lights out to avoid disorienting turtles, and giving all sea turtles and nests a wide and respectful berth when encountered on the beach.