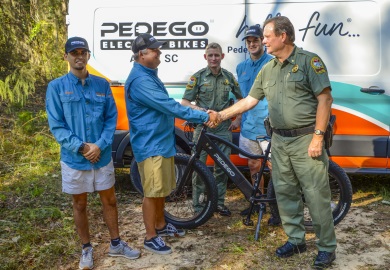 In the early days of the then S.C. Wildlife Commission, legendary Lowcountry game warden Mac Flood was known to patrol on horseback, leaving his home in Moncks Corner to crisscross his district for up to a week at a time. Could a modern-day electric "horse" be of similar use to the men and women who enforce South Carolina's game and fish laws today? Thanks to the generous donation of a new piece of equipment by Aiken County businessman Coker Day, the S.C. Department of Natural Resources (SCDNR) is about to find out.

Day is the owner of a new Pedego brand electric bike dealership in Aiken. The popularity of "e-bikes" - bicycles with battery-powered motors that help riders power over hills or simply maintain speed with much less effort — has exploded in recent years. Day and his wife experienced the bikes on a vacation trip, where they used them to tour a historic city. The bikes were enormously fun to ride, said Day, and almost immediately a lightbulb went off in his head about how well the same type of thing might work in his hometown of historic Aiken. It wasn't long before he was getting ready to open a new full-service Pedego bike shop in Aiken and thinking about ways the fledgling business could promote itself. Orange County, California-based Pedego provides support for dealers who want to donate a bike to a local organization, as a way to build community support and name recognition.

"I've always been a big supporter of SCDNR," said Day. "I served on the agency's Marine Advisory Committee for several years, and so when the company approached me with this idea, I immediately thought about my cousin, Jeff, [Lance Corporal Jeff Day, an SCDNR Officer in Charleston County] and how useful this could be to him and his fellow officers."

So Day contacted SCDNR Deputy Director for Law Enforcement, Col. Chisolm Frampton, and offered to donate one of Pedego's robust "Trail Tracker" off-road models to the agency to evaluate it for use by SCDNR officers in the field. That's good for the officers, who are always looking for a new tool to help them do their job, and hopefully, also good for business, says Day. "Once the community sees the benefits of the Trail Tracker in use in some of our beautiful natural regions, maybe it will inspire them to try an electric bike themselves." 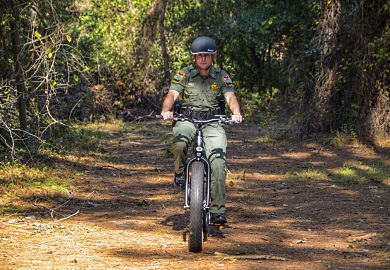 In October, Day and his staff delivered the bike to the SCDNR for a year of field-testing. The bike's fat tires help it maneuver over dirt, sand, gravel and snow at speeds of up to 20 miles per hour, and its 48-volt lithium ion battery can provide 500 watts of acceleration and extra hill-climbing power. Naturally, Lance Corporal Jeff Day volunteered for the duty to be the SCDNR's first official e-bike tester, and it only took a few turns around a wooded trail at a test site near Orangeburg for him to get excited about the potential the bike holds for his work. Its range (up to 60 miles in pedal-assist mode) and quiet, stealthy operation, will help him "cover a lot of ground, quickly and quietly," said Day, a decided advantage when you're going after night hunters, trespassers or others intent on breaking the law and evading detection by the SCDNR.

Day described a recent case that involved him tracking down an outlaw hunter illegally shooting deer on Dungannon Heritage Preserve and WMA at night using an infrared spotlight and crossbow. The man was himself using a bicycle to access the property to try and avoid detection. Officer Day left his truck at the gate and hiked in more than a mile through the woods on multiple occasions to track the catch the man red-handed, knowing that the lights and sound from his truck or ATV would give the lawbreaker a chance to run.

"Imagine how much help this bike would be in situations like that," said Day, "or on the Francis Marion National Wildlife Refuge," where there are miles and miles of trails and fire roads, many of them gated and only accessible by foot or bicycle.

"In an emergency situation, or when someone is injured, we may not have time to wait for Forest Service staff to come and open a gate for us, with the bike, we can get assets into those types of remote areas much more quickly, he added."

Officer Day also anticipates using it to do license checks of hunters, and of surf fishers in Charleston County, where the e-bike will cause much less commotion than an ATV or truck on the beach would. Field testing of the bike by Officer Day and his colleagues will continue over the next year, with maintenance and support provided by Pedego of Aiken.

Veteran SCDNR officer Major Gary Sullivan oversees field operations and investigations for the agency and was on-hand to see the first day of field-testing of the Pedego bike. "I'm very impressed with it," said Sullivan. "I think it will not only give our officers a tool that is quiet and capable, it could also provide them with a health benefit. It's definitely going to be great for our WMAs, where you have a lot of locked gates and a lot of ground to cover."

If it works out, perhaps more SCDNR officers will be using e-bikes as part of their job in the future. But unlike those trusty steeds used by Mac Flood and the other old-time game wardens, they won't require a bale of hay to refuel at the end of the day. The e-bike recharges using a regular home outlet and costs only about ten cents per recharge, according to the company.