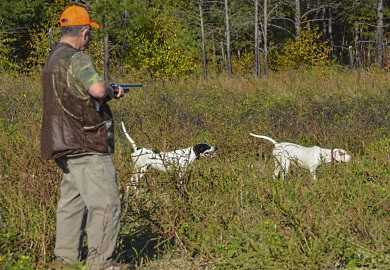 On these areas, anyone with a valid hunting license and Wildlife Management Area (WMA) permit can train bird dogs between Sept.15 and March 15 (Sundays excluded). Dog trainers may release and take pen-raised quail or pigeons for training purposes, only within the areas designated by posted signs reading “Bird Dog Training Area.”

“The average person that does not own a sizable tract of rural land has little opportunity for training a bird dog,” said Michael Hook, SCDNR Small Game Program leader. “We borrowed this idea from Georgia, where public dog training areas have proven very popular, and we believe our constituents will appreciate the opportunity as well.”

Locations and directions to named WMA properties managed by the SCDNR can be found on the agency's public lands web pages. Specific boundaries of the Bird Dog Training Areas are delineated on maps within the kiosks located at the WMA parking areas and are well marked with signage. A fourth Public Bird Dog Training Area is planned for the Edisto River WMA in Dorchester County but is not yet open.

Other applicable regulations are that it is unlawful to take game by any means (other than released quail or pigeons) within the bird dog training areas, except during the lawful open seasons for such game.

Participants in dog training may not possess any firearms or other equipment for taking game except handguns or shotguns with blank cartridges, or shotguns with number 8 shot or smaller may be used while training dogs using pen-raised quail or pigeons.

All participants in bird dog training must wear a hat, coat or vest of solid visible international orange. Dog trainers using pen-raised quail must possess proof of purchase for the birds or other documentation that the quail are pen-raised.

The South Carolina Public Bird Dog Training Areas are open to hunting by other users for whatever game is in season on that WMA, so user conflicts were an early concern. However, Hook noted that Georgia DNR staff have not seen any significant conflicts between dog trainers and other user groups there over several years that their dog training areas have been in operation.