December 16, 2014Trout stocked by helicopter on the Lower Saluda

The S.C. Department of Natural Resources (DNR) stocked approximately 18,400 rainbow and brown trout into the lower Saluda River near Columbia on Dec. 16 using a helicopter and a specialized lift bucket. Of that total, 13,000 are brown trout and 5,400 are rainbow trout for a total more than 3,000 pounds.

This year around 4,000 of the rainbows and 2,000 of the browns were tagged with what’s known as a T-bar tag attached just below the dorsal fin of the trout. Each tag will be 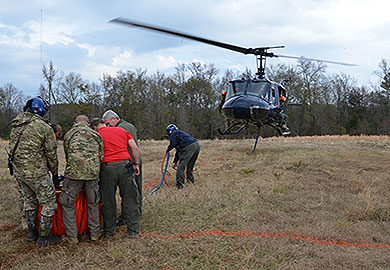 individually numbered thus providing a means of gathering data on a particular fish. Anglers can assist DNR biologists by reporting their catches of tagged trout. Details on this procedure can be found on the DNR webpage as well as kiosks located at several public access points along the river. "This is being done as part of a study to collect information on the river’s trout population such as survival rates and the number of fish that succumb to natural and angler mortality as well as information on the fishes’ growth rates.," said Hal Beard, a DNR fisheries biologist based in Columbia.

DNR Board Member and avid outdoorsman Mike Hutchins was also on hand for the trout stocking, "Many people in South Carolina may not realize the quality of fishing here on the Lower Saluda River. It's second to none except maybe to New Zealand. So the fishing here is just awesome."

The trout stocking is also an example of partnership between state agencies. State Law Enforcement Division pilots are able to continue required training and helicopter stocking allows the DNR to better distribute trout up and down the river system and prevents the concentration of fish in any particular area. Trout came from Walhalla State Fish Hatchery in Oconee County. The cold waters released from the bottom of Lake Murray provide suitable habitat for the trout in the Saluda River, creating a unique and very popular fishery in the midlands of South Carolina.

The DNR stocks approximately 30,000 trout each year in the Saluda from December through February in what it calls a "put, grow and take" fishery that relies on stocking to maintain populations and the cooperation of anglers for success. Young trout grow rapidly after stocking. If given time to grow, they can exceed 20 inches, considered trophy size for this type of fishery. Anglers can assist the trout in reaching this size by  practicing catch-and-release fishing, especially during the winter and early spring. DNR conservation officers will also be patrolling the river heavily to try and hold down over-the-limit catches.

South Carolina’s trout fishery generates about $9 million annually for the state’s economy in direct retail sales, with a total estimated economic output of more than $14 million, according to the “National Survey of Fishing, Hunting, and Wildlife Associated Recreation” published by the U.S. Fish and Wildlife Service. The effects of trout fishing can be felt in many segments of Upstate and Midlands communities, from motels and restaurants to gas stations and sporting goods stores. Approximately 400,000 trout are stocked into public waters in the state’s upcountry each year by the South Carolina DNR. The trout are stocked in more than 50 cold-water rivers and streams in Greenville, Pickens and Oconee counties, in Lake Jocassee, and in the cool tail-waters below the Lake Hartwell and Lake Murray dams.