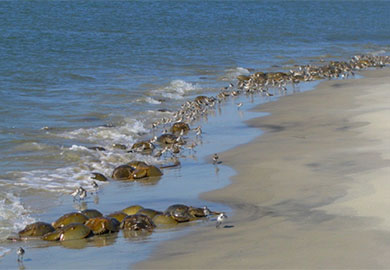 Under this past Friday's full moon, beachgoers in South Carolina might have caught a glimpse of a creature twice as ancient as the dinosaurs. It's spawning season for the horseshoe crab (Limulus polyphemus), and biologists at the South Carolina Department of Natural Resources (SCDNR) are wrapping up research efforts to learn more about these mysterious arthropods from their once-a-year mating and egg-laying activities.

Horseshoe crabs play a critical role in the life cycles of shorebirds like the red knot (Calidris canutus), which relies on the crabs’ nutrient-rich eggs to fatten up before a migration that can span tens of thousands of miles. To keep both species in South Carolina for generations to come, SCDNR officials want to better understand the size and status of the state's horseshoe crab population.

Horseshoe crabs surface to spawn in great numbers every spring, drawn ashore by full and new moons and when tides are highest. During this short field season, the agency conducts surveys, obtains genetic samples, and tags thousands of crabs with small plastic discs. Each tag carries a unique identification number and a toll-free phone number to call if people spot a tagged crab on the beach.

"SCDNR has participated in the annual horseshoe crab tagging program administered by the U.S. Fish and Wildlife since the program began in 1999," said SCDNR assistant marine scientist Dr. Amy Fowler. "This year we tagged 1,388 horseshoe crabs throughout Port Royal and St. Helena Sounds."

Tracking horseshoe crabs can provide critical information about where they're distributed, how long they live, and seasonal movements – data that will also inform scientists’ understanding of the shorebird populations that depend on horseshoe crab eggs.

"Most people think of Delaware Bay when they think of horseshoe crabs, but South Carolina also has spawning crabs," said SCDNR wildlife biologist Janet Thibault. "Shorebirds like the red knot stop over at crab spawning sites on South Carolina beaches to gorge themselves on eggs. These shorebirds have a long way to go, migrating from the southern tip of South America up to their breeding grounds in the Arctic."

If you seen an upside-down horseshoe crab stranded on the beach, officials suggest saving a life by flipping the crab. As many as 10% of horseshoe crabs may die each spawning season as a result of stranding, according to one study.