Because of Deveaux Bank Seabird Sanctuary's regional importance to seabird nesting, recreational use areas are now limited to the ends of the island during the nesting season.

Deveaux Bank will continue to be closed year-round above the high water line with the exception of a portion of Deveaux Bank on the Seabrook Island side designated for limited recreational use. In 2014, seasonal closure of a portion of the beach for coastal birds will occur from middle of May through October 15. Next year this seasonal beach closure will last from March 15 through October 15. Closed areas will be demarcated by symbolic fencing and will occur on the seaward side of the island. The beaches on the ends of the island, facing inland, will continue to be open year round.

Because habitat use changes with time, results of seasonal closures will be evaluated each year and adjusted to ensure protection of coastal bird habitat but also allow people to access areas not critical for seabirds. Dogs and camping are prohibited year-round. Trespassing violations on Deveaux Bank incur a fine of up to $465 and/or 30 days in jail. 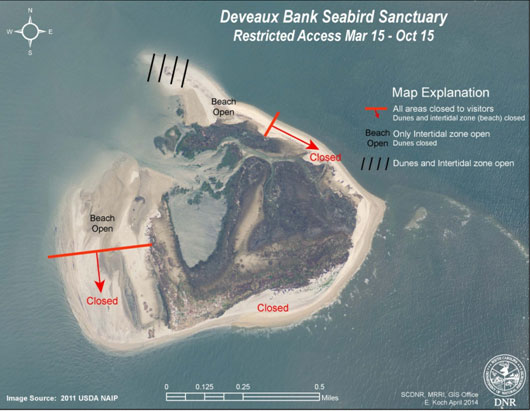 Deveaux Bank Seabird Sanctuary, between Seabrook and Edisto Islands, is managed by DNR to protect coastal birds. Not only is this island the most important site in South Carolina for many species of nesting seabirds, but is the largest colony of Brown Pelicans on the Atlantic coast. In 2013 Deveaux Bank had 3600 Brown Pelican nests or 67% of all pelicans nesting in South Carolina and about 25% of the pelicans nesting on the Atlantic coast of the US. Last summer there were up to 6000 pelican chicks, not yet able to fly, on the beach. Black Skimmers, a species of concern, once nested in South Carolina in colonies of 10,000s. Only 674 Black Skimmers nests were counted last summer and almost half were on Deveaux. Black Skimmers nest on bare sand often near the high tide line, thus minimizing disturbance to nesting colonies of this spectacular bird is essential for their continued existence in South Carolina. Deveaux Bank also has large colonies of nesting terns and wading birds (egrets, herons and ibis). Pairs of solitary nesting American Oystercatchers and Willets can be seen along the beach on every side of the island. These shorebirds and colonial nesting seabirds, such as Black Skimmers and terns, abandon their nests as people walk by, leaving their eggs and chicks camouflaged in the sand but unprotected from overheating in the sun and predatory gulls.

Although there are many barrier islands along the coast of South Carolina, Deveaux Bank is one of only five islands that have the correct topographic profile for attracting nesting seabirds. Most seabirds lay eggs in shallow scrapes or rough nests directly on the ground, and can easily be crushed underfoot. Nests are built above the high tide line yet many people don't realize the intertidal zone or beach below the high tide line can be just as important. DNR partnered with Clemson University to study seabird nesting ecology at Deveaux Bank. "All areas of the intertidal zone were used for courtship, resting and raising chicks and this habitat is essential for successful reproduction and migration," Dr. Lisa Ferguson reported. The beach is where these birds live.

Deveaux Bank's beaches are also important for migratory shorebirds and the island has the largest number of Piping Plovers in South Carolina, a federally listed shorebird. High priority species that are rapidly declining such as Red Knots, Sanderlings, Ruddy Turnstones also use Deveaux Bank as a resting and feeding area. Shorebirds are declining faster than any other group of birds partly because their habitat is increasingly used by humans. Species nesting on these estuarine islands typically select a nesting location and mate in March, and build nests and lay eggs in April and May. Many younger birds do not leave nesting islands until October, and migratory shorebird numbers peak during spring and fall months. Seasonal closure of part of the Deveaux Bank beach is an important step in SC's effort towards protecting migratory coastal birds. South Carolina has 187 miles of coastline and Deveaux Bank is less than 1 mile. Protecting this small portion for the birds is a way to help ensure future generations enjoy the diversity of coastal species we take for granted. Without undisturbed stretches of beach these iconic species will disappear.