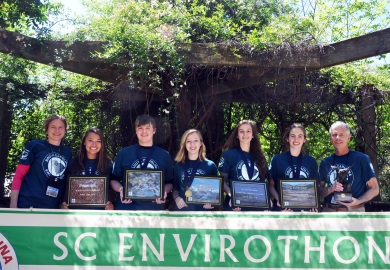 Spartanburg’s 1st place team in the 2018 SC Envirothon competition traveled to Idaho this past summer to compete at the National Conservation Foundation’s Envirothon.

With 50 teams participating from the US, Canada and China, Spartanburg placed 5th overall!

Congratulations to the team members and coaches on a job well done!

What do our South Carolina high school students know about Western Rangeland Management? Those that participated in the 22nd Annual Envirothon Competition know a lot, and they proved it to panels of orals judges, station managers, staff, volunteers and their peers, at the state competition held recently at the Sandhill Research and Education Center in Columbia.

With temperatures in a range that might even mimic those out West, 18 teams of students from around the state came together to ride the environmental wild pony known as Envirothon. Testing student’s knowledge of core environmental subjects such as Aquatics, Forestry, Soils, and Wildlife, the Envirothon also challenges students to work together and formulate a cohesive plan revolving around an oral presentation scenario based on the current topic: “Western Rangeland Management: Balancing Diverse Views.” Presenting arguments to back up their stance on what to do with 1,800 acres of bequeathed property to the state, students took natural, social, political and economic issues into consideration and defended their positions.

Although all the teams that participated were winners for their efforts in studying, preparing for, and completing the exams at the competition, three teams were awarded scholarships for their levels of expertise. Receiving $1,000 in scholarships each was the First Place Team of Spartanburg High School Team A, following at a close second was Spartanburg Day School receiving $500 each, and Spartanburg High School’s Team B placed third overall with a $250 scholarship for each team member. New teams, most improved teams, and teams that scored the highest at each test station were also recognized.

Spartanburg’s Team A will now begin preparations for the National Conservation Foundation’s Envirothon, North America’s largest high school environmental education competition, which will be held in Pocatello, Idaho, in July. The first-place teams from each participating state and Canadian province will gather to be tested, in a similar, but more rigorous competition, with even higher stakes for scholarship awards. If you would like to support the S.C. Envirothon Team in their travels to Idaho, contact Marc Cribb, Envirothon coordinator with the South Carolina Department of Natural Resources (SCDNR) at myrickd@dnr.sc.gov or (803) 734-6367.

The S.C. Envirothon is coordinated by the SCDNR in cooperation with the S.C. Forestry Commission, U.S. Department of Agriculture Natural Resources Conservation Service, Central Carolina Technical College, Francis Marion University, Florence County Environmental Discovery Center, S.C. Soil and Water Society and Clemson University Sandhill Research and Education Center. Major financial sponsors are the S.C. Conservation Districts Foundation, Harry Hampton Memorial Wildlife Fund and the S.C. Association of Conservation Districts. If you would like to become a sponsor, or if you wish to follow the successes of the S.C. Envirothon, visit the website at www.dnr.sc.gov/education/Envirothon or like us on Facebook at www.facebook/SCEnvirothon.