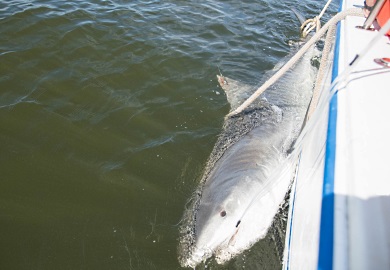 Harry-Etta is the fifteenth tiger shark to be tagged by SCDNR biologists in South Carolina waters. (Photo: Taylor Main/SCDNR)

The distinctly striped tiger shark is one of the largest predators in coastal South Carolina waters – and now you can follow the movements of one through her pregnancy.

This week, South Carolina Department of Natural Resources (SCDNR) biologists working in St. Helena Sound caught and satellite tagged "Harry-Etta," a female tiger shark clocking in at 12"2' long and 820 pounds. By providing real-time data as she cruises Southeastern waters, Harry-Etta could help researchers answer important questions about how long sharks of this little-studied species live, how often they reproduce, and where and when they migrate.

For several years, SCDNR biologists have worked to better understand these large predators through collaborative work with the shark-tagging nonprofit OCEARCH, charter captain Chip Michalove, and College of Charleston researchers. The work has shed light on the importance of South Carolina's southern sounds (particularly St. Helena and Port Royal Sounds) as foraging and potentially nursing grounds for tiger sharks.

"This is actually the third time we've encountered Harry-Etta," said SCDNR biologist Bryan Frazier, who leads the agency's shark-tagging efforts. "She was tagged with a conventional tag in 2013 by charter captain Chip Michalove and again by SCDNR in 2015 in Port Royal Sound. This time, we were able to apply a SPOT tag, allowing us to follow her movements over the next year."

SPOT (Smart Position or Temperature) tags are small devices secured to a shark's dorsal fin that track movement by sending signals to a satellite, or "pings," each time they're above water for more than 90 seconds. Like humans, each shark is unique in their habits of movement – so some animals ping frequently, while others surface only rarely.

There was something else noteworthy about Harry-Etta this time around, Frazier said: "We also confirmed she was pregnant by ultrasound, so we can gain insight into what habitats she uses during gestation." 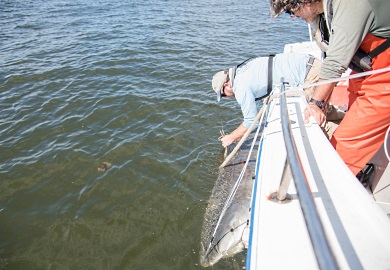 Harry-Etta is the fifteenth tiger shark Frazier's team has fitted with a satellite transmitter in South Carolina – but the first one known to be pregnant. In recent years, fresh mating wounds found on other tagged tiger sharks have led the team to believe that South Carolina's southern sounds and nearshore waters could be important locations for tiger shark reproduction.

About Harry-Etta's name: The Hampton Wildlife Fund was established in 1981 and named for South Carolina conservationist Harry R.E. Hampton. Dedicated to the conservation and protection of the state's natural resources, the Fund has now sponsored two satellite tags for tracking tiger sharks, both of which have been named in Harry Hampton's honor.

"I'm happy our board, led by Chair Deidre Menefee, unanimously voted to fund a second tag," said Hampton Wildlife Fund executive director Jim Goller. "We're proud to support SCDNR in their efforts to study these magnificent creatures that frequent South Carolina waters. I fish St. Helena Sound where Harry-Etta was tagged, making this tiger very special to me. We are all super excited and can't wait to follow her on the OCEARCH website." Learn more about the Fund online.

You can follow Harry-Etta's travels in real time on the OCEARCH Global Shark Tracker, available online and for download on Apple and Android platforms.