Somewhere off the coast of the Carolinas, a large shark is wearing a new bit of high-tech bling.

S.C. Department of Natural Resources (DNR) biologists recently deployed a satellite transmitter on a 12-foot, 4-inch female tiger shark in Port Royal Sound. “Harry-Ette” is the latest animal to be tagged by a collaborative project that’s using the technology to unravel long-standing questions about this remarkable species and the importance of South Carolina’s waters to its success. 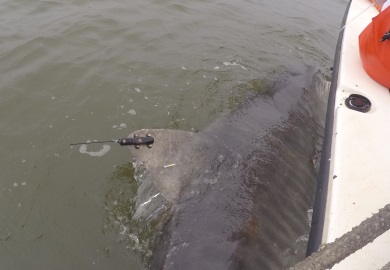 In recent decades, large coastal sharks have generally suffered declines along the Atlantic coast. Studies showed diminished numbers of the distinctly patterned tiger shark along the East Coast in the late 1990s, but more recent surveys have suggested their numbers are increasing.

“Because tiger sharks are relatively fast growing and have larger litters of pups, they’ve been able to bounce back quicker than other large sharks,” said Bryan Frazier, DNR wildlife biologist and principal investigator on the tiger shark tagging project.

But efforts to better understand these animals in the Atlantic Ocean have been complicated by a lack of data – until recently, researchers knew little about the tiger shark’s life history (how long they live, how often they reproduce), when and where they migrate, and how they use different habitats, especially the coastal waters of the southeastern United States.

That’s where Harry-Ette comes in. She’s the twelfth tiger shark fitted with a satellite transmitter off the South Carolina coast in a joint effort between DNR, nonprofit research organization OCEARCH, the College of Charleston, and Captain Chip Michalove of Outcast Charters in Hilton Head.

The project crew has tagged 27 tiger sharks in total, although only twelve have been fitted with satellite tags. All 27 sharks were tagged in Port Royal and St. Helena Sounds. The information gathered about each animal – and the data points their satellite transmitters log each time their dorsal fin breaks the ocean’s surface – is bringing into focus an unexpected story about how tiger sharks use the sounds of southern South Carolina.

"The recent capture of "Harry-Ette" as well as another mature female tiger, both with fresh mating wounds, leads us to believe that Port Royal Sound and South Carolina nearshore waters are likely important to the reproductive cycles of tiger sharks, perhaps even functioning as a mating area," said Frazier. “We look forward to following Harry-Ette over the next few years, and hope she will help us better understand the reproductive cycle and movements of mature/pregnant tiger sharks."

About Harry-Ette’s name: Harry-Ette’s satellite transmitter was sponsored by the Hampton Wildlife Fund Inc., a nonprofit whose mission is to receive private funds to assist in educational and other endeavors designed to contribute to the conservation and protection of the wildlife and marine resources of the state of South Carolina. The Fund, established in 1981, is named for Harry R.E. Hampton, South Carolina’s first true conservationist. “Harry-Ette” is named in his memory.